Album Review: Albert King – I’ll Play the Blues For You 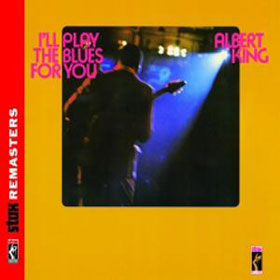 By 1972, legendary blues guitarist and vocalist Albert King had little if anything left to prove. Pushing fifty, the man was a giant both in reputation and physical stature. His recording career began rather late in life: his first album The Big Blues came out in 1962. So he was a mere ten years into his catalog when he released I’ll Play the Blues for You on Stax. It was his fifth long player for the Memphis label, not including the collaborative billing of Jammed Together with guitarists and labelmates Pops Staples and Steve Cropper.

I’ll Play the Blues for You successfully combines King’s blues stylings with the Stax sound. Backing is provided by either The Bar-Kays (surviving members of Otis Redding‘s band) or The Movement, Isaac Hayes‘ ace outfit. And the Memphis Horns provide stellar support, sounding as if they just walked over from having cut their parts on Boz Scaggs‘ self-titled effort. (That record was cut three years earlier, but the horn vibe is eerily similar in the best possible way to their thrilling work on Scaggs’ cover of Fenton Robinson‘s “Loan Me a Dime.”)

The album’s title track meanders its way through a Chicago-meets-Memphis arrangement, with a lengthy and entertaining spoken interlude from the man himself. And King strikes just the right note when – right before he takes his solo – he leans into the mic and mumbles, “’Scuse me.” The track “Little Brother (Make a Way)” successfully blends the streetwise vibe of Isaac Hayes’ funkier work with King’s own blues sensibility. The Memphis Horns’ tasteful work – often behind the guitar solos – always adds, never intrudes. And King can be counted on to take two, sometimes three, solos in a given song.

Since it’s 1972, there’s definitely a funky vibe to the songs on I’ll Play the Blues for You. Plenty of wah-wah guitar is splashed all over the songs, but it’s never overwrought. At under three minutes, “High Cost of Loving” is among the album’s shortest tracks, but even its standard blues changes are rendered thrilling thanks to the singing, playing and arrangement. The track could easily have gone twice as long without overstaying its welcome; tasty and subtle electric piano gives it some lovely texture.

Even though its crowd applause sounds more than a bit suspect, a cover of Marvin Gaye‘s “I’ll Be Doggone” is a number that rivals Parliament/Funkadelic in its funked-up quotient. And King gives clues to Led Zeppelin, who were wondering around the same time where exactly the confounded bridge was. It’s right, here, guys.

“Answer to the Laundromat Blues” is a song in the popular response-song mini-genre, but in the case, the original is King’s own 1966 hit, his first for Stax. Throughout the number, King raps (and by “rap” I mean what Isaac Hayes did in his own raps: talk, not declaim poetry.) Of course King being King, there’s a blistering guitar solo, too.

With such a lengthy title, “Don’t Burn Down the Bridge (‘Cause You Might Wanna Come Back Across)” needs five-plus minutes just to get the words to the title out. But it’s really just another tasty blues workout that provides King the opportunity to pull another solo out of his trusty left-handed Gibson Flying V. Tinkling electric piano and gurgling Hammond B-3 add color to the typically sure-footed and tight rhythm section backing. And as always, the Memphis Horns punctuate the proceedings at all the right moments.

From the same sessions that produced the other tracks on I’ll Play the Blues for You, “Angel of Mercy” wasn’t on the original Stax LP, but it had been appended to earlier reissues. Not so for the four bonus tracks on the 2012 Stax/Concord reissue. An alternate (and longer!) version of the title track features the sax from the Memphis Horns stepping out front for a tasty solo, typically great (and different) guitar solos from King, and no spoken section. The alternate “Don’t Burn the Bridge” is even harder-edged than the official version. “I Need a Love” is Albert King at his most Isaac Hayes-like. And a brief fiery instrumental titled “Albert’s Stomp” shows that King sometimes had more ideas than he knew what to do with.