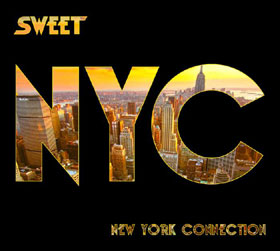 The band Sweet has a tortured, somewhat complicated history, one fraught with dizzying highs and devastating lows. The band formed in England in the late 1960s and were taken under the creative (or commercial, depending on ones viewpoint) wing of the Chinnicap organization (songwriting team Nicky Chinn and Mike Chapman). The duo groomed Sweet for success, but of a very specific type: bubblegum. With hits like “Little Willy” and “Funny Funny,” the band’s sound had more in common with Saturday morning cartoon music than the heavier sounds dominating the FM airwaves.

But they were good clean (well, not so clean…) fun, and despite what critics might have thought of them, they put on a good show, and the tunes were infectiously catchy. Their breakthrough really came with the 1975 release (in the USA) of Desolation Angels Desolation Boulevard*, a compilation of the best tracks off their recent UK long players. With now-immortal (if occasionally guilty pleasure) tracks like “Ballroom Blitz” and “Fox on the Run,” Desolation Boulevard showed a more rocking (if still bubblegummy) side to the band.

Subsequent releases found the group bristling under the heavy hand of Chinnichap; Level Headed showed Sweet aiming for a more serious approach, and they were rewarded with a massive hit in “Love is Like Oxygen,” a rare successful synthesis of bubblegum, hard rock and progressive rock. But hits on that level were not to follow, and the band’s subsequent material often had the unmistakeable whiff of bandwagon-jumping. That, coupled with lead singer Brian Connolly‘s alcoholism – a late-period Sweet interview in my unofficial DVD collection shows a badly wrecked Connolly barely able to operate; he makes Ace Frehley look like a straight arrow), all but guaranteed the group’s failure to thrive.

Various attempts at post-breakup reformations occurred over the ensuing years, but none was especially successful. Connolly died of liver failure in the late 90s, and drummer Mick Tucker passed away from leukemia in 2002. The group left behind an undeniably catchy body of work that has aged remarkably well; while singles like “Co-Co” are undeniably lightweight, harder-rocking glam anthems like “The Six Teens,” “Hell Raiser” and Blockbuster” (all on the American Desolation Boulevard, as it happens) rank among the best pop-oriented music of the era. A 2CD collection on Shout!Factory brought together the best of Sweet’s music – -the singles – and is an engaging listen start to (near) finish.

And Sweet influenced a long line of bands: not merely in their sartorial style (for that we have Sweet to blame for the look of many hair-metal bands of the 80s and 90s) but in their musical style; though both bands existed during the same period, it’s hard to imagine Queen having existed as it did without Sweet there to break some musical barriers.

But the Sweet saga hasn’t ended. The complicated story remained complicated: both guitarist Andy Scott and bassist Steve Priest have, in recent years, each led their own band called Sweet. And in 2012, Andy Scott’s version of the band released New York Connection, the first real album of studio material from a band using the Sweet name in thirty years.

While the old Sweet tracks – the songs not written by Chinn and Chapman – were often credited to all four members, neither Scott nor Priest were generally thought of as the band’s front men; that was Connolly. And on New York Connection, guitarist Scott takes the lead vocal on but one track, a cover of The Velvet Underground‘s “Sweet Jane.” Most other cuts feature the lead vocals of bassist Pete Lincoln, and while he’s not a Connolly tribute singer type, his vocal mannerisms are from the same school, and he possesses a similar range.

In fact all of the eleven cuts on New York Connection are covers; that’s the concept here. Clearly the idea was to take the Sweet aesthetic — poppy arrangements; rocking guitar textures; thumping, insistent beats; out-front lead vocals and backing vocals on helium – that worked so well in the 70s and then apply it to classic songs.

In general, the approach is successful. A cover of the aforementioned KISS guitarist’s solo turn – while not radically different than the original – breathes new life into the oft-forgotten number. The Yardbirds‘ “Shapes of Things” (mis-titled on the CD sleeve) is slightly less successful, but that may own more to the song’s ubiquity as a bar band number than any deficiency in the Sweet version. Patti Smith‘s “Because the Night” is as thunderous and anthemic as the original, and a somewhat unexpected cover of Dead or Alive‘s “You Spin Me Round” casts the song in a harder rocking format than the original. The Ramones‘ “Blitzkrieg Bop” holds up surprisingly well under the (relatively) more ornate arrangement Sweet gives it, and a reading of the chestnut “On Broadway” owes more to the Eric Carmen version than any other.

All in all, it’s a successful outing that reminds modern-day listeners why Sweet was successful in the first place. Whether the band can – or will – produce self-penned material to equal the songs on New York Connection is an open question. But in the meantime, this disc is a lot of fun.

* Of course. It was reeeeally late when I wrote the first draft. Thanks to a reader for pointing out my error.