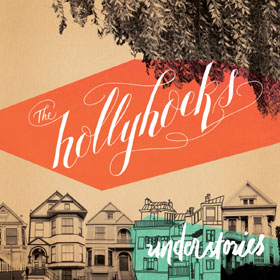 I heart Hollyhocks. There: I’ve said it. But I realize that I have a responsibility to provide a bit more detail for you, gentle reader. So, here goes.

The Hollyhocks are a four-piece – two women, two men – from Oakland. Their singular sound can best be described as a kind of cross between A Camp and Television. The similarity to the former – Nina Persson‘s “other group” besides The Cardigans – is found in the honey-voiced but ever-so-slightly knowing vibe put forth by Kristin Sobditch (guitar) and Yuri Jewett (bass), but the elegantly-wasted junkie vibe that crops up in some of the Swedish group’s material is not a part of the Hollyhocks approach. The Television connection comes in the snaky guitar lines of Dan Jewett. And the precise yet loose-feeling drum work of Jason Silverio adds the right ambience to their windy, evocative songs.

The lion’s share of songs on The Hollyhocks’ debut album Understories are mid-tempo, dreamy concoctions that wrap their way around a hook in a manner that seems (but almost certainly isn’t) effortless. The creamy vocal harmonies of “Sugar” contrast nicely with the song’s grungy, distorted guitar solo. Fans of The Church would find much to like in the Hollyhocks’ arrangements. There’s some lovely guitar jangle on “Iowa” that is pleasantly reminiscent of some of the sounds coming out of Athens in the early 80s (REM, Pylon), and that number’s vocal crosstalk is dizzyingly effective.

But nothing can prepare listeners for the fourth track on Understories. An emotion-laden song about a photo of a loved one, the song unfolds slowly, allowing the listener to savor its charms. Plucky acoustic instruments set the scene. But then the curtains open wider to reveal a lovely string section backing the band; it’s some of the tastiest classical instrumentation on a record since Oranges and Lemons-era XTC. But wait: the song sounds oddly – but not overly — familiar. And then it hits you: it’s a cover of Def Leppard‘s “Photograph.” But The Hollyhocks’ version stands the original completely on its head, creating something completely new and wonderful in the process. It’s easily among the most inspired cover versions – by anyone, ever – I’ve heard in my life so far. And the instrumental break (featuring the Magik*Magik Orchestra) actually brought a tear to my eye with its power and grace.

It’s not at all reasonable to expect an album to have anything else to offer after something as wonderful as “Photograph.” But Understories continues to impress and entertain all the way through to its finish. Those whose tastes lean toward smooth female vocal harmony (in a rock idiom) will dig the songs, and anyone who requires some tasty lead guitar work will find it – judiciously applied, employing a quality-over-quantity approach – on nearly every song. An oboe solo (courtesy of guest musician Amber Lambrecht) on the softly swaying “Marco’s Last Waltz” is heartbreakingly beautiful.

And just when you think you’ve got The Hollyhocks’ number, they take a musical left turn with “Everyone’s Here.” It’s a sunny, sentimental homespun country-flavored romp, populated with characters familiar to anyone who’s ever had a family or a neighbor. Guest player Myles Boisen‘s lap steel is note-perfect and will bring a smile even to those who don’t think they like that kind of thing. The track never takes itself too seriously, and splashes of warm humor are applied throughout the song. A brief but endearingly charming whistling solo finishes it off in style.

A hypnotic surf-style guitar figure forms the basis of the brief and low-key “Before Your Birthday,” a track that straddles alterna-rock and the chiming pop of groups like The Orange Peels. Speaking of whom…I’ve saved until now another two reasons you can be sure that The Hollyhocks’ Understories is a winning album start to finish: the album was produced by Allen Clapp, and is released on Mystery Lawn Music, as blue-chip a trademark of quality as you’re likely to find in music today.

I heart Hollyhocks, and you may well, too.