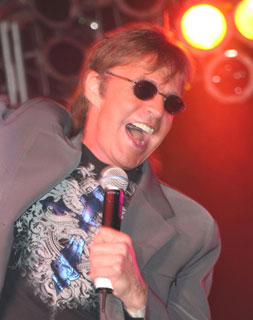 Around the time of Mark Lindsay‘s solo LPs, there were rumors that he started a solo career because he was going to leave Paul Revere and the Raiders, or had already left the Raiders. “It wasn’t true; I was always with the Raiders,” Lindsay insists. “But the start of all that just coincided with a lull in the Raiders’ career. One, there was time to do it. And two, the Raiders weren’t front-and-center out in the public eye, and I was more. So I can understand why people might think that I had gone off on my own. But it just happened to work out that way.”

During a break in the Raiders’ schedule – by 1970 they were not the in-demand act they had once been – Lindsay fronted a band called Instant Joy. “That was a group put together by [guitarist] Tony Peluso,” Lindsay says. “We were pretty rockin’, and we opened on tour for the Carpenters. It lasted a very short time; I think we were on the tour two or three weeks, and I started getting standing ovations before the Carpenters came on. And,” Mark chuckles at the recollection, “Richard Carpenter didn’t like that! So they booted me off the tour and got Mac Davis; he came out with just an acoustic guitar.”

Instant Joy did perform Lindsay’s hit singles “Silverbird” and Arizona,” but stayed away from most of the more ballad-oriented material. “We were playing hard, kick-ass rock’n’roll,” Lindsay says, noting that they even played “some of the songs that ended up on Collage [1970]. We left ’em panting.”

When the heavier, rocking Collage came out, Raiders fans didn’t know what to think of it: it wasn’t bubblegum, and it wasn’t a collection of ballads like Lindsay’s solo work. Plus, “Revere hated it. And he didn’t help by telling people he hated it. So it died, and my heart died with it.” In retrospect Lindsay believes that he should have stayed the course and cut two more albums following the direction laid out on Collage, bit instead he more or less gave up. As a recording entity, the Raiders would limp toward the end of their contract, though some tracks on their final two LPs are worthwhile.

After 1971’s You’ve Got a Friend, there would be no further new solo albums from Mark Lindsay on Columbia. “We didn’t have any single hits that Columbia deemed strong enough to build an album around,” says Mark. “At least that was my understanding.”

One solo project of Mark’s was indeed strong enough to support an album, and it provided a major shot in the arm to the Raiders’ flagging career. Though originally planned as a Mark Lindsay solo single, “Indian Reservation” (#1 Billboard in 1970) would instead become the biggest hit Paul Revere and the Raiders ever had.

“There were several reasons why it was a hit,” Mark observes. “It was timely: Bury My Heart at Wounded Knee was #1 on the New York Times best seller list, and the whole way we had shabbily treated Native Americans was also front and center. Everybody was wearing fringe jackets and Indian beads. But part of the success of that tune was that Paul Revere and his friend Mike Allen jumped on their motorcycles, and did a trip across the United States. They went to all the little five-hundred-watt teapot stations and said, ‘Here’s my record. Play it!’ And they did.”

But the strength of those stations wasn’t going to get the single over the top. “What it did,” Lindsay continues, “was galvanize the Columbia sales force. They gave it another look. You know that when you sell a product to a thousand people, the way to get it out there is to get those thousand people to really believe in it, to push it. And Paul Revere’s ride did that.”

So in retrospect, would the vocalist rather have “Indian Reservation” as a Mark Lindsay single than a Paul Revere and the Raiders single? He pauses to think, and answers noncommittally. “Yeah, I suppose so. I mean, there were no Raiders on it,” he laughs. “It was a Mark Lindsay single, and I produced it. But I don’t think it would have been nearly as big a hit if Revere hadn’t done that promo thing. So in retrospect, I’d probably leave it like it was. Otherwise it might have ended up like The Pretty Things: great music that nobody knows.”