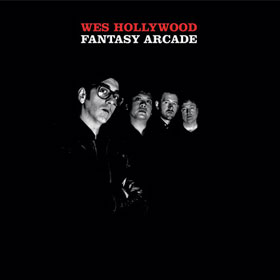 In 2012, it’s an open question how many listeners are looking for new music that draws upon the best of powerpop and what in 1979 we called new wave. Well, there’s one right here, and this listener is digging the new album Fantasy Arcade from Chicago-based Wes Hollywood.

“It’s Good to See You” pleasantly recalls Crashes-era Records; the bouncy, hook-filled arrangement sounds purpose-built for use in TV commercials, and that’s meant in the best possible way. Imagine Sgt. Pepper era-style songwriting with the instrumentation pared back down to the traditional guitars-bass-drums lineup with insistent piano accompaniment.

Wes Hollywood has a sound that’s clearly influenced by The Beatles circa ’65 but not slavishly imitative. There’s a healthy late 70s/early 80s new wave vibe to many of the songs on Fantasy Arcade. Hollywood’s vocals are always out front, and the band’s overall sound is tight without being slick, uncluttered without sounding like a demo.

On “Alfie” Wes Hollywood and band strike a skinny-tie pose reminiscent of The Real Kids. With appealing and accessible hooks built upon straightforward melodies, Hollywood stakes out musical territory similar to that of Cheap Trick, but without the arena-rock mentality and approach. Subtle splashes of keyboard add texture without lessening the guitar-based impact of the songs.

Throughout Fantasy Arcade, Wes Hollywood navigates just the right balance between jangle and crunch, between assertive lead vocals and tight, upbeat harmonies, between simple guitar-based songs and subtly textured arrangements. It’s always about the song, and through out the album that focus remains laser-sharp.

On the title track, Hollywood and band lean in a glam direction, loosening the pace a bit and adorning it with splashy drums; you can easily imagine the guitarist pose for playing this one: feet spread apart, guitar slung extra-low while the power chords are hammered out.

Fantasy Arcade is eleven catchy songs that manage both to blow by quickly and still stick in the listener’s memory, begging for another spin. Actually, there are twenty-two songs, if you consider that the LP version of the album is packaged in a lovely gatefold that contains both mono and stereo records. There’s something for the moderns – a download card – and a special bonus for those who fondly remember the albums of the 1970s: a band poster with facsimile signatures! What could be cooler?