Album Review: Robin Trower – Farther On Up the Road (part 1) 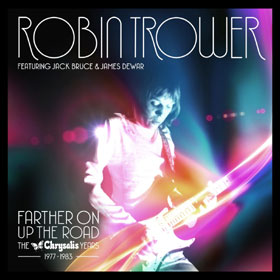 In the minds of many fans, guitarist Robin Trower did his finest, most enduring work on his first two solo albums, 1973’s Twice Removed from Yesterday and Bridge of Sighs from the following year. Coaxing a style that owed more to Jimi Hendrix than to any of the sort of lines he played while a member of Procol Harum, Trower’s power trio format was full of texture, and represented the finest of its style.

Trower’s 21st century recordings have been nearly as well received by critics; his 2010 release The Playful Heart is typically impressive and consistent in quality. But less well-remembered – yet full of exciting moments – are the albums Trower recorded for Chrysalis Records in the period 1977-1983. With punk, new wave and MTV, that era wasn’t one that shone a spotlight on Trower’s style of guitar-based rock, so the six albums he released in that period were often overlooked at the time and forgotten since.

A new 3CD set titled Farther On Up the Road: The Chrysalis Years compiles those six albums (plus a pair of non-album cuts) into a tidy package. Released in 1977, In City Dreams would be Trower’s last certified-gold album. In some ways, it followed the style of previous album, relying on a power trio format that kept his guitar work out front. Drummer Bill Lordan and vocalist James Dewar were on board, but for reasons unknown (and not made clear in the new set’s Malcolm Dome-penned liner notes) Dewar did not play bass; instead Rustee Allen held down the bottom end.

With Trower, Dewar’s vocals often bore an uncanny (but pleasant) similarity to Bad Company‘s Paul Rodgers. His vocal texture worked well on the meat-n-potatoes rockers as well as the more soulful midtempo numbers. “Sweet Wine of Love” finds the band sounding very much like Rod Stewart’s “Tonight’s the Night,” but on “Bluebird” (the album’s single) Trower plays in a way that suggests he’s the missing link between Jimi Hendrix and Joe Satriani. The track weds rock sensibility to a fragile, subtle melody, while mercifully sidestepping the whole power-ballad aesthetic. Elsewhere, Trower’s controlled use of distortion adds interest to a clutch of songs that – while good when taken on their own – often sound vaguely similar to other FM radio hits of the day. The funk vibe is briefly set aside for a blues number, the album’s sole cover. That live version of the blues classic “Farther On Up the Road” showcases Trower’s fretwork and might – might – be an outtake from the show released a year earlier as Robin Trower Live. In contrast to that track, the slow jam of “Little Girl” shows what Trower can do when overdubbing is added to his bag of tricks. And acoustic rhythm guitar adds just the right feel to the album’s title track closer. (This 2012 package adds the singe edit of “Bluebird” as one of two bonus tracks).

1978’s Caravan to Midnight picks up right where the previous album left off: same lineup, same producer, same funk-flavored sonic approach. With its tambourine accompaniment and Trower’s phased and wahwah-fied guitar work, “My Love (Burning Love)” sounds even more like Bad Company than anything on In City Dreams. And speaking of burning, thought Dewar’s vocals suit the music well, the smoldering title track might be the album’s most effective piece. “I’m Out to Get You” leans perhaps a bit too far in a disco direction, and there’s a disconcerting sameness creeping into the songs. It’s for You” is a catchy enough track, but lacks personality: it could easily be the latest offering from the Atlanta Rhythm Section or Santana. Some nice overdubbed vocal harmony sweetens the otherwise uninspired “Birthday Boy,” but when reading the sleeve and seeing a track called “King of the Dance,” most rock fans of the era probably cringed. The “come on, come on” lyrics deliver as expected, unfortunately. The record ends with a more-or-less instrumental tune called “Sail On,” one which failed to excite or offer anything new.

Trower clearly suspected that the rot had set in; he changed things up for Victims of the Fury. From the opening guitar squeals of “Jack and Jill,” it’s clear that a (slightly) different approach is on offer. Bassist Rustee Allen is gone, with Dewar again playing his more rock-oriented bass guitar lines. “Roads to Freedom” invites the by-now standard Hendrix and Bad Co. comparisons, but to be fair, that approach was more effective than the dead-end funkification of Caravan to Midnight. Overall, the songs feel more like those of a power trio, and the songwriting improves a notch thanks to help on lyrics on some track by Trower’s former Procol Harum band mate Keith Reid. And even though funk is no longer the goal, the metallic guitar tone on “The Ring” somehow suggests Stevie Wonder. Working unusual chord changes into a twelve-bar format, the slow blues workout “Into the Flame” ranks among the album’s most appealing moments. And on “The Shout” Trower and band try their hand at power-rock. Oddly, “Madhouse” anticipates (six years ahead of time) the sort of click-track blooze ZZ Top served up on their 1983 Eliminator. “Fly Low” leans in a George Benson direction, making the point that Trower is adept at a variety of styles; that’s well and good but did not help in giving Victims of the Fury any sort of identifiable sonic personality. (Single b-side “One in a Million” is a pleasant but ultimately forgettable bonus track.)

In Part Two of my review of Farther On Up the Road: The Chrysalis Years, I’ll take a look at the creative renaissance Trower enjoyed through his collaborations with Cream bassist Jack Bruce.