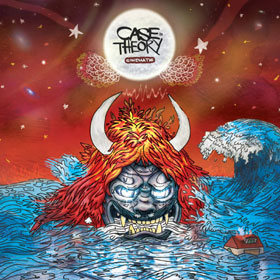 Modern progressive rock comes in many flavors. Among the most appealing of these is the variety that puts melody and hooks at the center of the music. One can reliably count on a modern prog band to deliver the goods where instrumental prowess is concerned, but where the whole thing often falls apart is in the vocal department.

Bay Area-based Case in Theory doesn’t have this problem: guitarist/vocalist Jonathan Posadas has a clear and straightforward vocal style that recalls – in the best possible way – rock singers such as Tommy Shaw (Styx), John Waite (The Babys) and Steve Walsh (Kansas). But despite his passing stylistic similarity to singers associated with rock’s bygone era, Posadas’ band has a decidedly modern sound. Case in Theory’s guitar textures are often similar to those employed by Russian Circles‘ Mike Sullivan, and the band’s overall sonic attack has as much in common with Radiohead (albeit with less electronics) as any classic/progressive act of the 1970s.

In fact, calling Case in Theory a prog band might be doing them a disservice. The songs on their debut album Cinematic are relatively short, musically to-the-point pieces. Conventional song structures are favored over meandering, suite-like constructions. On “National Ave.” – as on most of the tracks – each of the two guitarists (Posadas and Tadeo Ramirez) coax different and distinctive yet complimentary textures. While the chugging/slashing rhythm work is often thick with controlled distortion, the leads have a shimmering, chiming feel that evokes a plaintive mood, even when the song itself is in power-rock mode. Posadas’ vocals soar over the instruments, while the band’s rhythm section (Ben Everett on bass, and drummer Jamin Bracken) provides solid support. Said rhythm section remains focused on the twin goals of keeping the bottom end good and solid and on playing something that’s interesting in and of itself. A representative example: the album closer “Mavericks IV” balances a fragile, melancholy feel with arena-sized rock power.

The band members themselves must be fairly young, because their Facebook info page lists influences that include a bunch of stuff I don’t follow at all: Incubus, 311, Circa Survive, Minus the Bear…that sort of modern alternarock. But guitarist Ramirez also name-checks Al Dimeola and Mahavishnu Orchestra, so I suppose we have some common musical interests after all. No matter: while Case in Theory’s sound is firmly rooted in the present, they put careful attention into songcraft and arrangement, and those are timeless values.