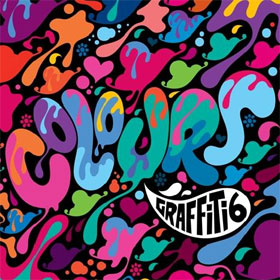 What’s sort of funny is that I rarely venture into such pop(ular) territory as a release like Graffiti6‘s Colours. But the record’s irresistibly catchy, infectious vibe makes it worth of coverage. Moreover, while I appreciate the work of auteurs who create musical masterworks on their own (Todd Rundgren etc.), I tend to look sideways at duos: give me a solo artist or give me a real band. Again, Graffiti6 – a duo of Jamie Scott and Tommy “D” Danvers – is worthy of exception. (Besides, there are three other “real” players on the album.)

Nicely stacked vocals are invariably placed atop a propulsive backbeat, one that often features a skittering drum track that feels organic. Carefully layered production values make every song on Colours sound as if it’s a top 40 candidate. Equally suitable for dancing and active listening, the songs on Colours are a delight.

I’m not here to make unsubstantiated claims as to the durability of this music: it’s pop, after all, so maybe it’ll last and maybe it won’t. That issue misses the point: Colours is about here and now. Deftly mixing vintage sounds (witness Wurlitzer electric piano, organ and touches of glockenspiel on the trpically upbeat “Stare Into the Sun”) with modern sensibility, Colours is both of its era and something more. If Zero 7 and the Happy Mondays formed a supergroup, their music might not sound all that different from Graffiti6.

The group even takes a quick detour from dancefloor ravers for the slow jam of “This Man,” in which they horn in on the style of the aforementioned Zero 7. Some understated jazzy guitar work is the centerpiece of the downtempo “Calm the Storm.” And the Motown aesthetic gets the Graffiti6 treatment on “Free,” a number reminiscent in the best way of Jackie Wilson‘s “(Your Love Keeps Lifting Me) Higher and Higher.” An unexpected pairing of Spanish-style nylong string guitar riffage and syntheiszer flourishes sets the vibe for the slinky title track. The singer/songwriter style is touched upon in “Goodby Geoffrey Drake,” suggesting that Graffiti6 can succeed at whatever style they choose. To that end, they sort of rock out on “Never Look Back,” a track that features splashes of string-section work that recall Quadrophenia-era Who. No, really. And the strongest track might well be “Stop Mary,” a song brimming with nothing more complicated than the joy of being alive.

The unabashedly commercial nature of Colours‘ dozen tracks is made clear when one looks at the band’s Wikipedia page: nine of the songs have been licensed for use in film and television. Clearly the decision-makers in Hollywood sense that Graffiti6 have captured the zeitgesit of 2012. Enjoy it now.