Album Review: Capsula – In the Land of Silver Souls 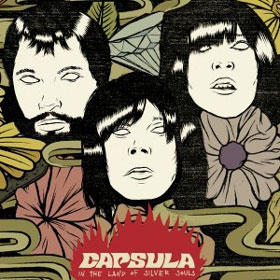 Rock’n’roll may well be an American invention, but that doesn’t mean that musicians from other countries can’t credibly create enduring works. And not just the usual suspects (England, Canada and other primarily-English-speaking countries). Witness some of the far-flung goodies included on Nuggets II: British Empire and Beyond for excellent rock’n’roll from France, the Netherlands, Japan, Germany…on and on.

Spanish-speaking countries have a long history of appreciating rock’n’roll. Los Bravos was a Spanish/German affair, and their hit “Black is Black” was a modest yet wordlwide hit back in the 60s. The wonderful if not widely known Mockers actually relocated from Virginia to Spain in the 90s, and enjoyed a loyal following there. (Our loss!) Chilean band Aguaturbia‘s albums in 1969-70 represented some of the most unusual psychedelic music of the era. And in fact an unofficial, fan-compiled collection of “Latinopsych” (admittedly, that’s a clumsy and misleading term; I’m open to better labels) called Psychodelicias offered up six CDs of psych, garage and popsike, as often as not sung in English.

Now comes Capsula, a power trio originally from Buenos Aires, Argentina (but now based in Spain). Classified as indie/garage, their swaggering music has more in common with Stone Roses than, say, the White Stripes. Thank goodness. Capsula established their cred for those in the know when they provided ace support to Ivan Julian on his The Naked Flame album. But on In the Land of Silver Souls – their seventh album (not including the collaboration with Julian) – it’s clearly their show.

Rarely on In the Land of Silver Souls does the band sound like a trio. Martin Guevara‘s barbed-wire guitar slashing (see “A Night in the Ocean” for an example) often forms the sonic centerpiece of the songs. The group’s sound is highly textured, and Ignacio Villarejo‘s propulsive drumming (accented by that old standby, the tambourine) will get heads nodding. And the throbbing, precise bass work (and vocals) of Coni Duchess bring it all together.

The title track proves that the list of primordial riffs still has room for additions; imagine a Black Sabbath riff played by a band that sounds halfway between Kula Shaker and Black Mountain.

The snippet of backwards-masking that kicks off “Into My Skull” sounds very much like the untitled bits on Oasis‘ (What’s the Story) Morning Glory?; the highly compressed, roiling sound that those fighting Mancunians got on their sophomore release is the same sonic approach used on In the Land of Silver Souls. But somehow it doesn’t sound as dated as one might expect.

Capsula played SXSW in 2009 to great acclaim, and as of this writing, they’re slated to return to that tastemakers’ paradise in 2012. If there’s one shortcoming of In the Land of Silver Souls, it’s that the record is so consistently good that it blows by too quickly. This reviewer’s prescription: repeat as necessary.