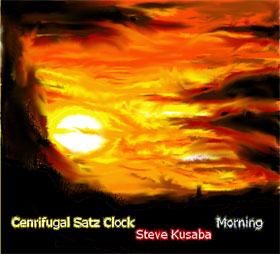 One of the most outré submissions I’ve ever accepted for review is the new work entitled Centrifugal Satz Clock: Morning by Steve Kusaba. The work very nearly defies accurate description. First of all, there’s the sheer breadth of the album: it sprawls across six CDs. There are more than seventy tracks contained therein, and the whole thing runs six and a half hours. I’d be lying if I said I’ve listened to the whole thing yet. But I do like what I’ve heard so far.

Clearly Centrifugal Satz Clock is ambitious. It’s a conceptual work, but I must admit that the premise and story line are far too dense for me to follow. The plot has something to do with the idea that seemingly random and unconnected events can change the course of history. Think of Archduke Ferdinand and WWI, for example. In any event, it’s an idea rich with possibility. A libretto of sorts (Centrifugal Satz Clock: Morning, the Book) purports to explain the work, but (a) I don’t have it and (b) I somehow doubt it will lift the veil of obscurity from this project.

And that’s actually okay with me. Plenty of compelling music is dense, impenetrable. And in fact Centrifugal Satz Clock bears the strong influence of a name one might think of when the descriptors “dense and impenetrable” are cited – Frank Zappa – and that’s all to the good.

Stylistically, it’s all over the map. There’s pop-rock, there are classical interludes, there are stage-y vocal sections that evoke memories of the late-era Zappa work Thing-Fish. Imagine an unholy amalgam of, say, Stephen Sondheim and The Residents, and you’ll begin to get a sense of what some of the music sounds and feels like. But as soon as you adjust your ears to that, the work pivots back to some highly tuneful ear candy, vaguely reminiscent of some of Jeff Beck‘s jazz-oriented mid 70s work (especially Blow by Blow). Splashes of reggae (“Yellowknife”), funk…you name it: this album is all over the place, which is in keeping with its globe-hopping storyline. Kusaba has a strong ear for melody, and while there’s a lot to make one think that Centrifugal Satz Clock is, well, weird, the music is often rooted in pop styles. Listening, one might think in turns of Steely Dan, Kronos Quartet and 10CC.

The production values on Centrifugal Satz Clock are stellar; while it’s all but certain that the album was pieced together in layers, there’s a rich ensemble feel to the songs. The guest list reads like a who’s-who of out-there artists; a few more familiar names include Dweezil Zappa, Vinnie Colaiuta and Steve Vai. And Olivia Maughan‘s lead vocal (in which she plays the part of The Narrator) on “Juneau” is a nice cross between pop and jazz. Timothy Carter‘s vocal (he plays a main character named Gordon) will remind some listeners of a slightly more mainstream version of The Residents. When Kusaba sings, his rich-yet-raspy tone sounds bit like Stu of The Negro Problem.

It’s difficult to know what exactly the aims of a project such as Centrifugal Satz Clock might be. In the iPod era, few listeners will sit through six and a half hours of music. I was lucky enough to score a review copy of the massive set, but the list price for the whole affair ($88.88) might prove daunting to some prospective listeners. (Individual discs are available, but [a] where to start? and [b] if you’re gonna dive in, why not go whole hog?) For the musically even-more-adventurous, the musical scores are available in PDF format via satzclock.com.

It’s up to each listener to decide whether this is a harbinger of doom or delight, but the fact that this 6CD set is subtitled Morning suggests that the full Centrifugal Satz Clock may eventually, er, clock in at eighteen discs or more. Who knows?

Details of a delightfully impenetrable sort can be found on Steve Kusaba’s blog.