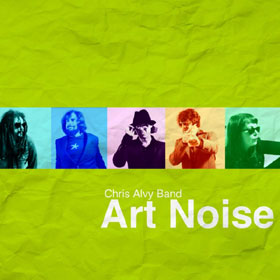 Naming an album is no small matter. Choose wisely, and you succeed in distilling the contents of the record into a few words: call it Dark Side of the Moon, for example, and we know to expect something a bit trippy. Name it Never Mind the Bollocks and you’ve telegraphed to listeners that the music might be a tad abrasive, confrontational. Choose poorly and you run the risk of misdirection.

I must admit that from my point of view, the Chris Alvy Band has chosen poorly in titling their new album. When I hear or read a title such as Art Noise, a few thoughts immediately come to mind. Art rock (a la Roxy Music, perhaps), noise rock, and then The Art of Noise, the 80s Trevor Horn project now inextricably entwined with the Max Headroom character in many listeners’ memories.

But guess what: none of those mental images has the least in common with Art Noise. It’s neither particularly arty nor especially noisy, and the straight-ahead power-rock / pop-rock / power-pop approach won’t remind you of that overused “orchestra hit” sample form the 80s.

No, Art Noise is sturdy rock of the sort that will appeal to anyone who digs Raspberries, Jason Falkner, Greenberry Woods…that sort of very high quality, emphasis-on-melody thing. The double-tracked lead guitar licks on “Something’s Missing” sounds a bit like Pilot, Badfinger, or a Wings outtake. There’s a little lick in the song that I’d swear was lifted from a Klaatu deep album track; whether it was or wasn’t is beside the point: it’s clear that Alvy and his bandmates have absorbed that sort of music into their systems, to good effect.

“Inside Job “swings and swaggers like prime Redd Kross; the song’s infectious chorus and stomping bridge reminds listeners what was so damn fine about bands like Cheap Trick and Shoes. The muted guitar chording on “The Fall” gives way to a near-anthemic arrangement; it’s exuberant, top-down-driving music.

One of the most effective qualities about Art Noise as a whole is the manner in which “soft” keyboard textures – strings, etc. – are employed in the delivery of “hard” arrangements. It’s a subtly effective approach, one rarely found in rock records. The mid-tempo yet rocking “Love” is an especially fine example of this; doomy Mellotron-style strings provide a warm melancholy to the song.

The band rocks hard-n-riffy on “Before You Burn and Fade.” A tasty guitar solo (shades of Thin Lizzy) and handclaps are among its highlights. “This is Your Life” ups the ante, and the close-harmony dual lead vocal conjures memories (again) of Redd Kross, specifically their 1993 tour de force Phaseshifter. And the band provides further proof that they can rock with subtlety on “Born,” a dusty, windswept ode that manages to evoke concurrent thoughts of The Beatles‘ “I Want You (She’s so Heavy),” the 21st century stomp of Wolfmother, and the impenetrably weird 80s TV series Twin Peaks all at once.