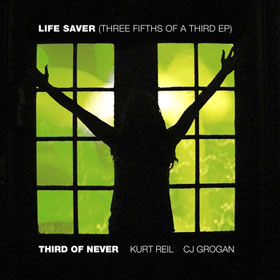 Life Saver is a various-artists EP. Then again, it’s not. The five tracks on this disc feature CJ Grogan on two tracks, two cuts from Kurt Reil of The Grip Weeds, and one by a group calling itself Third of Never, a collective including Reil, Grogan and Jon Dawson.

To complicate things a bit further, the two CJ Grogan numbers are teasers for an upcoming album called Cathedral, and the Third of Never cut is an advance release from an album titled Downrising. (The Kurt Reil tracks arer exclusive to this EP.) So as of this writing, the only place to get these songs is on this EP.

Potential listeners for whom Kurt Reil is the only familiar name, well, they have a good idea of what to expect. His busy-in-a-good-way drumming is a constant highlight of Grip Weeds albums, and his vocals suit the high-energy, anthemic power-rock style of that band. Third of Never is subtly different than Grip Weeds, but the two are sonically close enough that – if you’re a Grip Weeds fan – you’ll need “Life Saver.” The backing vocals – presumably from Grogan and Dawson – give the track a bit of a harder edge that’s not at all unwelcome.

Reil’s “Gonna Find My Way” starts off with a Bo Diddley beat applied to a folky, almost countrified arrangement. But the song’s breezy bridge and constantly shifting beats mean that it’s best labeled as ambitious pop.

CJ Grogan’s insistently upbeat “Tracer” sounds – most of all – like a Grip Weeds tune with a non-Grip Weed on lead vocals. Surprising, because Reil’s not credited as being on the track. That sure does sound like his style on the trap kit, though. Instead it’s Mike Polilli, Third of Never’s drummer (Reil used to be that group’s drummer, but is out front on vocals now.) Grogan’s backing on the track also includes Vince Grogan, who’s also – if you weren’t confused enough – a member of Third of Never.

Reil’s “Wake Up Time” is another catchy rocker, with support from the Grogans (but not Dawson or Polilli). The close vocal harmony on the chorus is the song’s highlight, though the brief lead guitar solo and high-neck bass figures are pretty happenin’ as well.

CJ Grogan’s “Margaret” closes the disc. Sadly it wouldn’t play on any of my machines. (An occasional peril of CDRs, one supposes.)

As a teaser, Life Saver does alert Grip Weeds fans and other like-minded souls that there’s more good music to come from the House of Vibes studio. Nothing remarkably different from The Grip Weeds, mind you, but quality stuff all the same.

Note: While you wait for Downrising, Third of Never’s 2007 Moodring is well-worth seeking out as well, especially for its hard-rocking cover of Pete Townshend‘s “Let My Love Open the Door.” And one of Dawson’s other projects is an outfit calling itself Taboo Stu (named after a brief Third of Never track); their Psychedelic Slosh is an off-kilter album full of songs with laugh-out-loud music in-joke titles. I won’t spoil it for you: go find it.