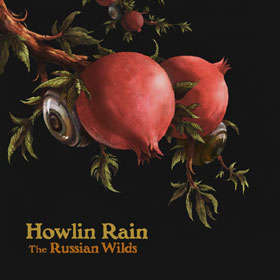 Remember the 1970s? It was a time when men strutted about the rock’n’roll stage as if they owned it. Mostly because they did. Hard-rocking vocalists forcefully staked their claim onstage, and the musicians behind ’em assailed their instruments as if beating harder on them wrought forth truer music than would simply caressing them. Long (well, not too long) before Johnny Rotten sang, “We mean it, man,” these rock gods certainly seemed like they meant it.

The guys in Howlin’ Rain clearly remember the 70s too. And if they don’t, they’ve studied well, absorbing all of the right things and few if any of the wrong ones. I first noticed the group right around the time of their March 2008 release, Magnificent Fiend. At the time I was editor in chief for a national print magazine (to quote Rob Reiner‘s Marti DiBergi character in This is Spinal Tap, “Don’t look for it; it’s not there anymore”) and had planned to cover that album. But the magazine suddenly went belly up, and I was on to other pursuits. So when an advance of The Russian Wilds recently landed on my desk, I was keen to check it out.

I had really liked Magnificent Fiend; my only reservation was that the album hewed a bit to close to the whole early-70s Allman Brothers sound and feel. That’s certainly a fine point of reference, but a bit more variety would have made a very good album even better.

I’m pleased to report that the sought-after variety is delivered in large quantities on The Russian Wilds. Howlin’ Rain still aim squarely for that 1970s hard-rockin’ vibe, but they’ve widened their scope – and applied their considerable talents – to take in and serve up music that references everything from Led Zeppelin to Vince Guaraldi, from Black Sabbath to Steely Dan to Three Dog Night. And they manage all of this without sounding at all like any of those artists. Or like the Allman Brothers, for that matter.

From the Leslie’d guitar opening of “Self Made Man” to the hard-charging riff that underpins the song, it’s clear that Howlin’ Rain have come to rock you. But the band seems not content to merely dream up a riff and then construct a tune around it. Each of the eleven tracks on The Russian Wilds has at least two – often three, four or more – good musical ideas in it. And each one is good enough to hold the song up.

But no: the band is on mission to give you more. So every damn guitar solo – and there are lots of ’em on this record – has its own unique tone. Thus the band asserts their own style, but rarely covers the same musical ground twice. The result is a varied yet consistent album that holds up to repeated plays. One moment they might remind you of Delaney and Bonnie; the next, Beck Bogert & Appice in one of their rare sensitive moments. And while sometimes “70s style rock” is shorthand for solo instrumental interludes that stay long past their welcome, on The Russian Wilds, you’ll want the solos to go on even longer than they do (which is, truth be told, pretty long). The twin- or triple-lead guitar approach so reminiscent of the Allmans (and subsequently beat to death by their lesser suthin’ rawk acolytes: Outlaws, Lynryd Skynrd, Molly friggin’ Hatchet, etc.) is still present on The Russian Wilds, but its use is dialed back to the point where it’s welcome when it does appear.

On “Phantom in the Valley” the band evokes thoughts of Blind Faith. The majestic and slowly unfolding “Strange Thunder” sounds uncannily like More-era Pink Floyd, reminiscent of that band’s pastoral mood pieces in which David Gilmour sang at the top of his register. But when the rocking part of the song kicks in, all traces of the summer of ’68 are blown away, revealing an insistent, Deep Purple-like approach. “Beneath Wild Wings” features some tasty (and tasteful) Rhodes work that would impress Stevie Wonder.

In this category, about the only thing I can imagine that would be better than The Russian Wilds is the chance to see Howlin’ Rain present this material – and some of their earlier music – live onstage. Luckily (for some, alas not for me) the band’s 2012 tour begins in February (mostly dates in the western part of the USA) and concludes with three dates in March at SXSW.