Album Review: Stew and the Negro Problem – Making It 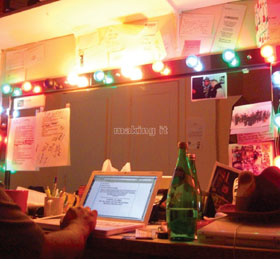 By most standards, Making It from Stew and the Negro Problem is a slightly strange affair. To begin with, any band with a name like that is asking for a certain amount of trouble. But rest assured that this isn’t some Stormfront-approved outfit or a bunch of Pat Buchanan wannabees. The singularly-named Stew is in fact African American. As The Negro Problem (without Mark Stewart’s nickname out in front) the band released a string of highly-regarded albums – four between 1997 and 2003 – and then more or less faded from sight. To similar praise, Stew released four albums under his own stage name Making It is the first Negro Problem release in nearly a decade.

With that bit of background out of the way, what of the music on Making It? Put succinctly, it’s all over the place. The instrumental title track that opens the album features beefy horns and a propulsive beat; it has the feel of a Theme From Something-or-other, though what that something is, is anyone’s guess. “Pretend” takes its wweet time unfolding; a slinky sax solo gives way to the dulcet voice of Heidi Rodewald, Stew’s ex (but musical partner). After her brief few lines, Stew takes over; then the pair take turns. Her voice is a little like Liz Cox (remember Combustible Edison from the 90s?), and he sounds a bit like George Duke. Gurgling organ and more of that tasty sax work form the understated basis of this very catchy-yet-intimate number. The end bit really soars; it’s nearly an anthem, save for lyrics about a “stupid little song.”

Things turn weird quickly, though. “Black Men Ski” features Stew’s exaggeratedly-enunciated vocals and instrumental backing that suggests Robert Fripp fronting DEVO. If anything, the lyrics are more oddball than the music. “Curse” finds Stew and the Negro Problem (possibly) settling in for a style, a sort of midtempo power-rock with more than the average amount of thought having been put into the lyrics. Their stock-in-trade seems to be memorable rocking songs that start quietly, develop and explode on their way out. Whether it’s Stew on lead vocal (“Speed”) or Heidi (“Love is a Cult,” a swaying number with lilting flute filigree) or both together, it all works.

The liner notes explain that “Making It was originally performed as a live song-cycle at St. Ann’s Warehouse and commissioned by them as well.” If there’s a common thread to the lyrical content on the album, it escapes me; the only consistently-applied quality I can spot is a vaguely poetic bent: a narrative-of-sorts number like “Suzy Wong” repeatedly name-checks actor William Holden. Huh? It’s like that. The left-turns continue: the instrumentation on “Tomorrow Gone” initially evokes TV themes of the 70s (think Sanford and Son) and segues into the sort of soft-shoe one might expect from Randy Newman or Harry Nilsson.

“Leave Believe” starts with Stew’s voice and a bit of guitar; by the halfway point it’s flowered into an arrangement – sweeping strings, repeated vocalisms and splashy drums, all at midtempo – that sounds like some lost Definitely Maybe-era Oasis track. It might be the best track on Making It.

Or not. The supremely catchy “Therapy Only Works if You Tell the Truth” pulls out all the stops. Rodewald fronts the band (with beefy horns and and insistent guitar line – for a Veruca Salt-flavored rocker that features some stinging (if brief) lead guitar work. The dialogue snippet the song’s end is sad and poignant.

“Treat Right” wraps up the album in a manner that finally lays bare the song-cycle character of the entire affair: best to listen to it to understand. Taken as a whole, Making It might just be one of those albums that requires a few spins to let its magnificent sink in: the musical and lyrical oddity of some tracks makes it something short of immediate. Those who take the time to get to know Making It will be rewarded with something special, unusual and – dare I say it – timeless.