Home  »  review   »   Album Review: The Franco Proietti Morph-tet – Like the Shore is to the Ocean

Album Review: The Franco Proietti Morph-tet – Like the Shore is to the Ocean 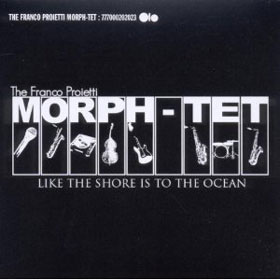 Combining not-traditionally-related styles is pretty much the thing to do in the 21st century. But doing it well, that’s a completely different story. One can’t simply toss assorted genres into the metaphorical sonic blender and whip up something good. It takes a deep understanding of the styles being combined.

That understanding is in evidence on Like The Shore is to the Ocean, the latest from a Montreal-based outfit called The Franco Prioetti Morph-tet. The genres being mashed up here are jazz, a bit of funk, tuntablism and hip-hop. Oh, but’s that’s just acid jazz, I hear you saying. Well, maybe. But when the Morph-tet takes a nodding, loping jazz track like “Logarhythm” and features both turntable scratching and a sax solo, both elements work: neither sounds or feels tacked-on. Some tasty Rhodes work gives the track a classic 70s feel, but that scratching pushes it into modern day. Toward the end of the number, things move into what can only be described as a dialogue between the horn section and the DJ, punctuated by jazzy drum fills. And the damn thing works.

A late-night blues bar ambience sets the scene for “Like the Shore Is…” and a soulful lead vocal calls to mind some of Zero 7‘s early efforts. The two-part “Thunder Don’t Smoke” kicks off with a bluesy intro that is vaguely reminiscent of Stevie Ray Vaughan‘s “Couldn’t Stand the Weather,” but then quickly moves into a boogaloo vibe evocative of 1950s crime drama themes. A beefy, assertive horn section carries the tune, and some tasty jazz guitar work adds even more interest.

Another two-parter, “Spacewhale” opens with a long, wordless female vocal chorus and streetcorner-style sax. A snaky saxophone melody forms this track’s basis; other instruments come in one by one to support that melody. A spoken/rapped vocal floats above a lilting two-chord vamp, and – in more traditional fashion – the song wraps up by restating the musical theme. A bizarre vocal section closes the song on a pleasingly jarring note.

“Silence Left Unspoken” uses upright bass and heavily echoed harmonica to establish its forlorn, melancholy vibe. For most of its run time (save the last minute and half or so) it’s more of a mood piece than a melody; the song begs for use in a film soundtrack. Things are kicked up several notches for the funky “Shout Out,” featuring a Caribbean-flavored vocal that’s equal parts singing and rapping. The vocalist’s phrasing owes more to jazz than rap, and the chorus vocals (accented with handclaps) imbue the number with the proper party vibe. And the stop-start horn work really cooks.

An ode to the band’s hometown, “Montreal” launches with some cartoonish dialogue between the turntable and a lone sax. Here the vocal is more traditionally rap-centric, but again the band – not samples or loops, mind you, but real players – keep things decidedly musical. The loose-snare jazz drumming is the track’s unifying element, though some instrumental soloing on the song’s second half (especially the guitar bits) adds even more flavor.

“Away From the Sound and Fury” is a nod to cool, romantic jazz of decades past. Lightly plinking piano and swaying horns evoke a film noir shipboard romance, forties-style. But the disc closes with “…to the ocean,” a song like nothing that has come before. Ghostly female vocalizations weave in an out of what’s almost a jazzy drum solo with the other instruments floating in and out. Elements of spy themes and other kitchen-sink elements all add up to the album’s most left-field track.

Some of the songs on Like the Shore is to the Ocean appeared on an earlier lo-fi live album, 2010’s Live! A Weekend at Centre St. Ambroise, but this studio album is the best entry point for new listeners.