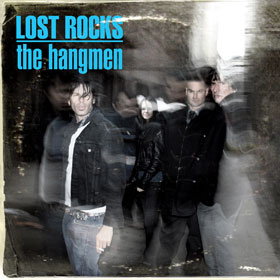 Sporting a cover that riffs visually on the Rolling Stones’ Aftermath is pretty much asking for trouble. And using Photoshop to imbue the cover image with surface wear that mimics a well-used LP sleeve, well, that’s courting an extra-critical approach to the contents of the album. Luckily, Lost Rocks from The Hangmen stands up defiantly to such pressure.

The press kit calls The Hangmen a “legendary Los Angeles band.” Me, I’d never heard of ‘em. The same presskit describes the band as “raw, punk rock’n’roll,” but Allmusic.com classifies The Hangmen as heavy metal. Now, when I think of L.A. punk, that calls to mind bands that don’t do a lot for me (I prefer the generally less pissed-off and more musical east coat, Midwest and English variants). And Los Angeles heavy metal? Let’s just not go there.

But judging from the eighteen tracks this collection, The Hangmen are really a straight-ahead, rocking-out no-bullshit band in the tradition of The Georgia Satellites and The Replacements. Vocalist Bryan Small sounds like an American Graham Parker as he snarls lyrics about life and love.

Despite the implications inherent in its title, Lost Rocks is no fazed-cookies collection of unreleased demos and b-sides: it’s more a best-of set (three early demos are tacked on the end for fun). The sleeve’s Stones connection is heard in the songs: “Bent” filters American c&w through a Mick Taylor-era Rolling Stones sensibility. Some of the songs do swagger in a just-this-side-of Guns’n’Roses style (probably responsible for the metal tag), but prominent use of harmonica on tracks like “Desperation Town” moves things back toward Long Ryders territory. Thank goodness.

There’s a garage vibe (sans organ) on many of the tracks, but The Hangmen seem less concerned with evoking a bygone style than they do in throwing in whatever sonic elements best get their musical point across. In the case of “Wild Beast” it’s a wah-wah guitar solo, something not often found among the Nuggets-worshipping set.

Brief testimonials from the likes of Mike Ness (Social Distortion) and Radio Birdman’s Rob Younger make the point that The Hangmen (a) have some hip fans and (b) aren’t a bunch of musical poseurs. Perhaps the most surprising thing about Lost Rocks is how all this music (originals spanning 1989-2007) escaped my notice for so long. Lost Rocks happily rights that wrong.