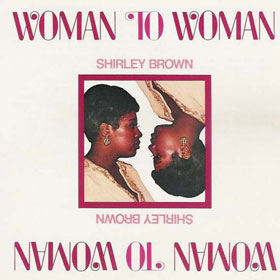 “Hello? May I speak to Barbara?” With that ominous spoken intro, Shirley Brown kicked off the hit song (#22 pop, #1 R&B in 1974) “Woman to Woman.” The album to capitalize on that success was also titled Woman to Woman, and featured the hit plus nine other tracks (including the minor R&B hit “It Ain’t No Fun”). With able support from Stax sessioners (Duck Dunn and Al Jackson from the MGs, plus guitarist Bobby Manuel and Marvell Thomas on piano), Brown delivered her smooth and soulful vocals.

Stax founder Jim Stewart produced the session (a rare occurrence by this point in Stax’s history), and the songs were provided mostly by house writers. Reliably evocative brass and string arrangements give Woman to Woman an unmistakably Memphis feel: that’s The Memphis Horns and the Memphis Symphony Orchestra, so what else could one expect?

There’s a subtle Caribbean flavor on “Long As You Love Me,” vaguely reminiscent of Johnny Nash’s 1972 monster hit “I Can See Clearly Now.” The understated slow-jam “Stay With Me Baby” successfully folds gospel elements into a sexy number. The proto-disco vibe of “I Can’t Give You Up” sounds like a hit, and the sultry “Between You And Me” serves up some stirring strings to back its Shaft-y guitar and funky electric keyboard work.

The 2011 Concord remaster (the original was issued  on Stax imprint Truth Records) appends five bonus tracks, and while Brown is in fine form on the album-proper – specially on her soaring, gospel-inflected vocals near the end of “It Ain’t No Fun” – the real undiscovered gems here are the bonus cuts. Almost certainly dating prior to Woman to Woman, four of the five bonus tracks are from a session that finds Brown covering Aretha Franklin to winning effect. It’s especially interesting to hear her reading of “Respect,” successfully combining the female vocal style of Aretha’s version with an updated take on Otis Redding’s original via unknown Stax sessioners. “Rock Steady” is a departure: a funk jam with some especially tasty bass work. The track suggests that Brown could have easily pursued a different direction with equal success. And the reissue’s sole previously-unreleased track, a slow, bluesy reading of Stevie Wonder’s “Signed, Sealed, Delivered, I’m Yours” weds Brown’s talking-intro formula to the classic, creating something wholly original in the process.

Remarkably, though Brown long ago left Stax (well, Stax left itself), these days she remains active, purveying a winning style that hasn’t really changed all that much in the ensuing thirty-five years. Some of that credit must go to Frederick Knight, composer of “It Ain’t No Fun” and writer of some tracks on her most recent outing (2009’s Unleashed). But in the end it’s Brown’s distinctive no-nonsense heartfelt delivery that is the enduring hallmark of her work.