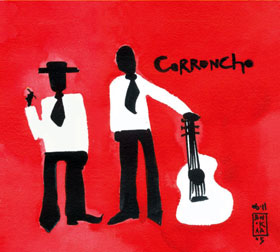 If you’re just joining us, you may or may not be aware that Phil Manzanera – Firebird-wielding guitarist extraordinaire known for his work with Roxy Music – has an abiding love for Latin culture. It’s an integral part of his heritage and life story, as well-explained in the documentary Revolution to Roxy, included on his retrospective The Music 1972-2008.

Manzanera’s latest project doesn’t even bear his name. Corroncho is a thematically unified album that delivers a dozen songs deeply marinated in a Latin style, but delivered with a rock sensibility. This is no dilettantish side-project for Manzanera: he lends his talents to this project in a heartfelt manner. The lyrics – and there seem to be a lot of ‘em — are wholly in Spanish, as is the enclosed booklet. No compromises are made to the solely-English-speaking listeners who might wander into the disc. But then none are necessary. While those not fluent in Spanish won’t be able to follow the stories in series of songs, the in-English press kit helpfully explains the theme: “…two Latin males, their trials and tribulations, good and bad points, loves and hates…”

Celebrated musicians from the Spanish-speaking countries are all over the disc, which also includes guest spots from Robert Wyatt, Chrissie Hynde, Annie Lennox and many others. Very much unlike Roxy Music — and featuring little of the soaring and/or angular electric guitar work associated with Manzanera’s 1970s style – Corroncho is nonetheless an enjoyable album. Those interested in something outside the box yet accessible could do worse than spend some time with Corroncho.