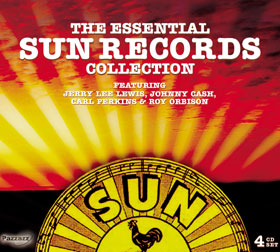 First, the bad news, such as it is: There’s no Elvis Presley on this 4CD set with the thus-somewhat inaccurate title The Essential Sun Records Collection. Any set claiming to cover the groundbreaking label’s output simply has to include some of Elvis’ legendary sides. Right?

Well, yes. But clearly the licensing fees required to slap some of Elvis’ first five singles onto the set would have been prohibitive. Besides, most interested in this material will have those songs elsewhere. So with that out of the way, is The Essential Sun Records Collection a worthwhile purchase?

Certainly it is. While neither comprehensive or presented in an especially scholarly manner, this set – including a pair of “Best of Sun Records” discs plus one each covering country and blues – brings together a good bit of important and (best of all) entertaining music. In addition to the usual essential suspects (Carl Perkins, Jerry Lee Lewis, Johnny Cash, Charlie Rich, Roy Orbison), listeners are treated to some lesser-heard sides that fill in a lot of the spaces in one’s collection. And even among the high-profile names there’s plenty of great material. Carl Perkins’ “Sure to Fall” is a reminder to Beatles fans that the latter were hugely influenced by this music: their BBC cover of the song is nearly a carbon copy of the original here, down to the twangy vocal harmonies.

It’s useful to remember that the aforementioned names weren’t the only artists creating vitally important music on the Sun label. Little Junior Parker’s “Mystery Train” delivers the classic in an arrangement quite different – but in some ways equal to – Elvis’ reading. Billy Lee Riley’s “Red Hot” is as exciting as anything Jerry Lee ever did. (Those impressed by that track are advised to track down the Rhino box set Loud, Fast and Out of Control for loads more in this vein.) And for listeners who want to hear the song again but with different words, check out Riley’s “Flyin’ Saucers Rockin’ Roll,” also included on this set.

Tracks that are often mentioned in histories of the era – yet rarely heard on oldies radio or anywhere else – make up a good portion of these discs. Songs like Bill Justis’ “Raunchy” and Jackie Brenston’s “Rocket 88” offer as much to explain the importance of Sun as do the more well-known hits. (Many of the latter are included, too.)

The blues-centered disc includes sides from Rufus Thomas, Howlin’ Wolf and James Cotton, but it also features blues (or blues-ish) cuts from artists not generally associated with the genre, names like Charlie Rich and Jerry Lee Lewis. The country disc offers up fifteen lesser-heard tracks, including “Gonna Dance All Night” by Hardrock Gunter. (A good thumbnail bio of Gunter can be found in Nick Tosches’ Unsung Heroes of Rock N’ Roll: The Birth of Rock in the Wild Years Before Elvis.)

The brief liner notes for each disc spend most of their ink noting chart positions and market value of the rare 45s; those interested in historical contextualization will have to look elsewhere. But the music is the thing here. As a low-budget way to add some Sun to one’s day, The Essential Sun Records Collection is a sensible purchase.

Related Note: An essay based on my 2010 visit to Sun Studio is here.