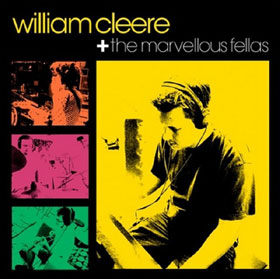 When endeavoring to craft a review of a pop album that is built around acoustic piano and male voice, it’s nigh on impossible to avoid mention of Elton John, Ben Folds, Billy Joel and Bruce Hornsby. So there: I’ve gotten that out of my way.

But not, alas, out of my system. The self-titled album from William Cleere + the Marvelous Fellas doesn’t shy away from the comparisons, yet Cleere has a style of his own. “How Do You Learn to Go On?” is a slow, elegiac ballad that would have fit nicely on Tumbleweed Connection; for most of its runtime it’s just Cleere and his piano, but in the final minute or so, crashing drums and measured bass lines up the emotional ante.

“Labor Day” mines a more conventional pop vein, though it too sounds like vintage Elton in his prime, albeit with an easy, unforced vocal delivery. Karla Kane (Agony Aunts) lends her lovely pipes to the song, evoking Elton’s hit pairing with Kiki Dee. (Fun fact: the album was recorded live-in-the-studio on Labor Day.)

An ambitious, swinging jazzy feel is the focus of “Side Effects.” The piano lines race along, aided and abetted by Khoi Huynh’s (Agony Aunts again!) muscular, precise bass work. Cleere places glissandos for maximum effect. Charlie Crabtree’s assertive, inventive yet understated drum work propels “Kara,” a track on which Cleere displays his vocal range as well as (yet again) his keyboard chops. Cleere has a knack for building songs that have a sing-along vibe to them, yet still offer enough in the way of compositional flourishes to make them multi-layered.

“High Flying Bird” takes the listener back to Elton-land again, with a melancholy feel reminiscent of “Candle in the Wind” (the original, not that cheesy “Princess Diana” remake.) Choir-like backing vocals add just the right touch. The showy “The Girl From NYC” sounds – and is arranged – like the sort of thing one might hear and see on an off-Broadway production aiming for that mythical/never-was 50s style. It’s also the rockingest track on the disc so far: Huynh’s almost playing Entwistle-style lead bass here.

“Soul” slows things back down, and Cleere’s accompanists craft their parts to showcase the piano and solo vocal. Cleere’s left hand spends a lot of time in the piano’s lower register, and Huynh does an ace job of staying out of his way while still offering support. “Leaves” is even slower and sparer, opening up an arrangement that delivers a warm, expressive reading from Cleere. The song builds in emotional content as it unfolds.

On the wordy “Shoes,” Cleere and his pals outdo themselves in the uptempo department. Forgive the endless Elton comparisons, but this track feels a lot like “Love Lies Bleeding” without the angst and heartbreak. Some dissonant and suspended chording from Cleere adds a welcome edge. A dramatic big finish suits the song perfectly.

William Cleere + the Marvelous Fellas wrap things up with the lovely “Goodnight Moon.” Here they conjure thoughts of — of all things – Bob Seger at his most thoughtful crossed with Jackson Browne at his most restrained. Perhaps the strongest melody on the disc (and that’s saying something), “Goodnight Moon” offers a compelling lyric as well. Karla Kane’s honeyed harmony vocal adds a lump-in-the-throat feel to round out the disc.

Special mention should be made about the dependably crystalline production by Allen Clapp (The Orange Peels) and understated support on guitar from KC Bowman. Those Bay Area folks down there at Mystery Lawn have their own modern-day Wrecking Crew-in miniature. More, please. And soon.