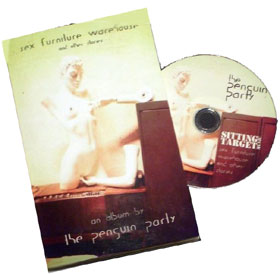 This one earns an A+ before the CD even comes out of the package. Sex Furniture Warehouse and Other Stories by The Penguin Party isn’t just an album. It’s a book as well. And in a very effective example of synergy, the book and the CD both stand on their own; one is not strictly necessary to enjoy the other. But if you do take them together (that’s how they’re packaged), one enhances the other.

Coming from Essex, England – the region that has given the world the pop genius Martin Newell – The Penguin Party is a band assembled by guitarist/composer/lyricist/author Dave Milligan. Something of an unheralded rock-pop renaissance man, Milligan has been plying his trade for awhile as a member of Arco, and Sex Furniture Warehouse is the Penguin Party’s second album (See Thru Songs came out in 2008). Milligan writes songs that have both strong melodies and wry, clever lyrical turns (think Nick Lowe, Difford/Tilbrook or Ben Folds).

The songs on Sex Furniture Warehouse are funny, often spit-take hysterical. But Sex Furniture Warehouse isn’t a comedy album. It’s in the man-looks-at-forty (or fifty) vein, mining universal themes in a way that will resonate with those of a certain age (and others, too). The song titles alone are a treasure of wordplay, puns and general silliness: how else to explain “Mike Leigh-on-Sea” or “Mid Life Chris.” What’s more, the album’s title was inspired by a store sign in Milligan’s hometown of Essex: a couple letters had fallen off the sign (or, more likely, they’d been stolen by some clever sods).

All of this cleverness would matter not a bit if the songs weren’t up to muster. But the paperback book collecting the album’s lyrics makes for a quick chuckle-and-nod read, the music is pretty ace as well. The songs rock, often veering between a ska-flavored romp and straight-ahead rock’n’roll. Milligan is unafraid to sing in his native dialect, and his vocal delivery is halfway between the aforementioned Newell and Andy Partridge.

Like both of those supremely talented artists, Milligan crafts lyrics that are right on the edge of mocking, yet his songs still betray a fondness – even love – for the characters he’s drawn. The story/vignette that is “She Was Only a Roofer’s Daughter” channels Ray Davies at his storytelling best, painting a portrait of people who are quintessentially English. Yet those characters resonate in an odd way with listeners from, well, wherever.

“This is My Station” rocks with edgy, nervy attention similar to very early XTC: this really is pop. “It’s Not Big and It’s Not Clever” weds the jangle of 80s Robyn Hitchcock to beefy horn charts more reminiscent of Oingo Boingo. The lyrics — while clever – tend to sting a bit as they hit their mark with knowing accuracy. In “Mid Life Chris,” Milligan sings of “an ill-advised flirtation with a motorbike” and “a brief infatuation with an underling.” Wish to admit it or not, men of a certain age will understand where Milligan’s coming from here.

But don’t get the idea that Sex Furniture Warehouse is a collection of midlife angst threatening to unravel. “Song for My Old Lady” is a heartfelt love song in which Milligan implores, “Let’s play while we’re still young enough” and “Be the parents that our people warned us about” (catch that?). And it’s all supported by inventive, uptempo playing. If Madness had more of a rock sensibility, they might’ve crafted a tune like “You Learn to Climb When You’re Small.”

The height of Sex Furniture Warehouse – the best among a no-duds collection – is undoubtedly the lump-in-the-throat tale “Whatever Happened to Tomorrow’s World,” a wistful yet happily resigned look at life. But then things turn very heavy, rocking like Porcupine Tree at their most metallic on “Why I’m Never Invited to Parties.” Applying metal flourishes to a pop song, it’s a stylistic left-turn that actually works in the album’s context.

The a capella intro of the ironically jaunty “It’s Just Your Lifetime; It’ll Soon Be Over” sets the tone for the album’s final track. It’s a ditty that essentially says, in that oh-so-British way, “stiff upper lip, gents; you’ll get through it.”

And the book! The lyrics are well worth reading separately from your listening experience. The accompanying photos are clever and apt, and the accompanying essays are warm and wonderful. I know that the book and the CD are (nicely) packaged together, but the book deserves a place of honor on my bookshelf, and the CD deserves a similarly honored spot, fitting as it does between The Partridge Family and Michael Penn on my CD shelves.

Sex Furniture Warehouse is over far too soon. It’s a delight through and through, one that rewards repeat listens.