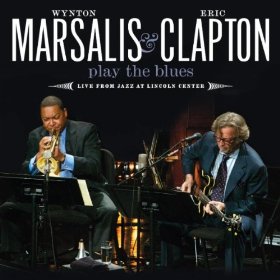 There’s long been an undercurrent of humility (or perhaps even shyness) in the work of Eric Clapton. Sure, he was dubbed “God” in late-sixties Britain thanks to his guitar work, but Clapton has always seemed uncomfortable as a front-man. Even his Derek & the Dominos project was an attempt to get away from having his name on the marquee.

So it’s perhaps not a great shock to find a suit-and-necktie Clapton serving as – more or less – a rhythm guitarist on a new live set with Wynton Marsalis titled Play the Blues: Live From Jazz at Lincoln Center. And in fact, Clapton does play some fiery guitar (check out the opener “Ice Cream”), but he does so in a context that many fans will consider a departure for him: Dixieland swing.

It’s really not that major of a departure. At the front end of the British blues boom, the raging style in the UK was “trad jazz” (Stateside we call it Dixieland). More of an ensemble style than a showcase for solo prowess, trad jazz (along with a related style, skiffle) informed the musical sensibility of damn near every English rock musician of the era that you’d care to name.

This set is full of fun, upbeat, decidedly American music, and it’s clear that Clapton is having the time of his life playing along with Marsalis and his ace sidemen. Oftentimes – in fact, most of the time when he’s not taking a solo – Clapton’s guitar melts into the sonic gumbo; he’s not easy to pick out, and that’s clearly by design. With a sound that’s closer to W.C. Handy (two of Handy’s songs are covered here) and Louis Armstrong than, say, oh, Robert Johnson, Play the Blues does show a side of Clapton’s interest that he’s not highlighted greatly until now. Yes, “Ice Cream” is a Robert Johnson song, but he never played it like this.

Even when playing songs that are closer in style to what most Clapton fans think of as the blues, the arrangements are altered to work within the band’s format. There is only one musician each handling clarinet and trombone – and one trumpeter besides Marsalis – but it often sounds like more. Clapton plays some electric leads with a bit of distortion, but this is most certainly not rock’n’roll. It ain’t “Crossroads,” either, though of course the chord structure on numbers like “Joe Turner’s Blues” evokes memories of that classic blues song.

Few concessions to modernity are made on Play the Blues, and in context that approach makes sense. Seeing “Layla” listed on the sleeve did worry me a bit: I’m not a fan of the anemic retread Clapton applied to the classic on his Unplugged album, so I wondered what he and Marsalis would do with (or to) it in this idiom. Happily, the arrangement here is more spirited and appealing than the Unplugged reading.

While Play the Blues might not be a huge departure for Clapton, for many of his fans it may remain one. He’s to be credited for following his muse wherever it takes him, and certainly at this point in his life and career he’s got little to prove. But one wonders if Play the Blues may end up as one of those discs that every Clapton fan owns but none actually plays more than a few times. I enjoyed Play the Blues, and the guest appearance of legendary musician/musicologist Taj Mahal (for one song on the CD, two on the DVD) is a delight. That said, if you’ll excuse me, I’m off to spin Disraeli Gears.