Album Review: Tom Principato – A Part of Me 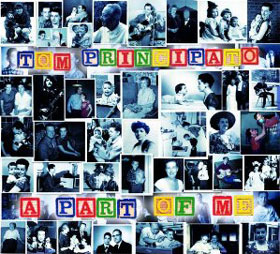 There’s an old saying where pop music is concerned: “Don’t bore us; get to the chorus.” 1970s hitmakers The Raspberries were the very embodiment of this aesthetic: many of their songs would kick off, toss out a line and half of a lyric and head straight for the hook-laden chorus. For that style of music, nothing could be better. It’s what the people came for.

When we’re speaking of the blues, however, an entirely different set of rules apply. And those rules — such as they are – vary widely depending on the particular sub-style of blues, and depend to some degree on what is being highlighted in the given song. Take, for example, an album by a blues guitarist: in such a case, many listeners come to hear the burning fretwork. The verses and choruses can sometimes get on the way; to some they’re little more than a necessary evil, something that has to be included.

Occasionally – rarely, actually — an album and/or artist comes along that transcends those so-called rules. The restrictions simply don’t apply. A Part of Me by is just such an album, and its maker Tom Principato is just such a musician.

I’ll admit it: I wasn’t familiar with the guitarist when A Part of Me landed on my desk a few weeks ago. The disc went in the slush pile, where it would remain until I did one of my periodic smash-or-trash exercises to winnow down the stack of CDs for potential review. When I finally popped the disc into the player, though, I knew immediately that I had received something special.

A Part of Me is one varied collection. The disc opens with “I Don’t Wanna Do It,” a longish, lazy and loping country-tinged blues in which Principato’s voice is (initially) the primary focus. He may be from Virginia, but Principato’s voice sounds a lot like an American Eric Clapton. A lengthy guitar solo takes center stage for the song’s second half, quickly establishing (for the new listener) that Principato is a commanding, inventive player.

Principato applies a throaty, jazzy feel to his guitar licks on “Sweet Angel.” One of several tracks that features notable guest artists, the track serves up Hammond B3 courtesy of Chuck Leavell. On “Part of Me,” the guitarist sets up an slow gospel-blues arrangement evocative of Boz Scaggs‘ cover of Fenton Robinson‘s “Loan Me a Dime.” The Memphis Horns’ Wayne Jackson handles the understated yet integral horn charts.

On “Down the Road,” Principato shuts up and plays his guitar. His tasty guitar licks say most of what needs to be said on this track; he’s ably assisted by legendary keyboardist Brian Auger (on organ and electric piano) and renowned session bassist Willie Weeks. The highly melodic instrumental dialogue is such that vocals would have simply gotten in the way.

The modified Bo Diddley snare beat that kicks off “Down in Lou’siana” telegraphs the song’s feel long before the title is made evident. A swamp pop arrangement suits this mash note to the joys of the Pelican State. On the instrumental “Back Again & Gone” the guitarist sounds a bit like Eric Johnson; a master of tone, Principato coaxes a dizzying array of subtle sound shades out of his axes (onstage he plays a Strat and Tele).

Speaking of onstage, I was lucky enough to catch Tom Principato on a recent live date here in Asheville. Tearing through much of A Part of Me plus selections from his vast back catalog, Principato was supported by bassist Steve Wolf, drummer Joe Wells (I think) and percussionist Josh Howell. The latter adds a lot to the band’s live sound, allowing them to move far beyond the standard blooz power trio format. On the record, Gail Sanchez‘s congas do the same for the Santana-flavored “Stranger’s Eyes.”

Tom Principato’s A Part of Me is the ideal blues album to play for your rock-leaning friends who (wrongly) insist that all blues sounds the same. Finely textured and varied, this album is a highly enjoyable listen start to finish.