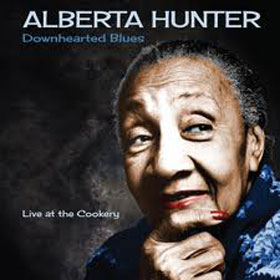 Here’s a slightly unusual item, but it’s of such historical import that it would be unfair to call it a curio. Alberta Hunter was 86 years old when this live set — titled Downhearted Blues — at Greenwich Village’s The Cookery was captured. But the verve with which she delivers the songs belies her age.

Hunter’s story is a fascinating and (of course) long, but I won’t recount it here; Bill Dahl’s liner notes do a fine and succinct job of tracing her history. Suffice to say Alberta Hunter had paid her dues decades before this date. She had plenty of ups and downs: recording under the sponsorship of some well-known names and touring the globe, she also found herself without a contract more than once, and took a long break from performing in the 1960s and ‘70s.

Across eighteen tracks, backed only by piano and upright bass, Hunter sings torch songs, saloon ballads, and swingin’ bawdy blues shouters. A pleasing mix of standards (“I Got Rhythm,” “Dark Town Strutter’s Ball”) and naughty numbers (“Two-fisted Double-jointed Rough and Ready Man,” “You Can’t Tell the Difference After Dark”) makes up the set. Hunter works the crowd and does far more than simply deliver the songs. Plenty of singers live their entire lives without developing the expressiveness and control that the then-octogenarian displays on this set. With a you-are-there ambience to this soundboard recording, all the listener needs is a good glass of scotch and a dimly-lit room to set the right scene for this disc.

Alberta’s between-song banter — including a brief bit about a song she wrote in 1923, one that Bessie Smith covered as her first recording – only adds to the enjoyment of the program. Hunter’s professional yet wholly-unaffected style is a refreshing change from most live blues albums that one might stumble across these days.

Blues aficionados: even if your tastes don’t generally extend to female blues singers, you’d do well to open your mind and ears for a listen to Downhearted Blues: Live at the Cookery.