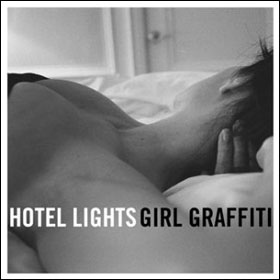 Here’s a possible recipe for success. Start with a three-piece band that enjoys mega success in the 1990s. At the height of their success, they break up, and the drummer eventually starts a new band in which he doesn’t play drums. They make music that sounds not a bit like the drummer’s old band, music that’s equally compelling, but in a different way.

No, I’m not referring to Nirvana, Dave Grohl and Foo Fighters here. Instead, the 90s band is Ben Folds Five, the drummer is Darren Jessee, and the new not-like-the-old band is Hotel Lights. Here on Girl Graffiti (the group’s second third* album) Jessee plays nearly everything but drums. And if Hotel Lights sound like anybody else (and they don’t much) it’s probably Pete Yorn. Jessee’s quiet, unforced vocal delivery recalls Yorn’s musicforthemorningafter in its smoldering intensity.

Content to craft songs that hold up on their own, Hotel Lights crafts songs that draw the listener in; rarely does the band rock out in any sort of traditional sense. Fascinating choices in instrumentation — chamber strings, a splash of banjo – add to the ambience of songs mostly built around acoustic guitar or piano. Think of Hotel Lights as a sort of low-power pop.

Clever lyrical turns reminiscent of Fountains of Wayne (witness “Dave Sharkey to the Dance Floor”) are delivered in such an unassuming manner as to risk their being missed altogether. An intimate you-are-there ambience is the backdrop for those quiet vocals; Jessee seems to ascribe to the idea that you get more attention by whispering than shouting.

The art-pop of “Through the Crowd” builds and builds, and then soars off into the ether for its last few minutes. The intentionally lo-fi approach on the intro of “My Pretty Quirk” gives way to a sweeping, cinematic arrangement; didn’t see that one coming. The disc closes with the noir-ish Neil Young-styled “Into the Blue,” a tune of heartbreaking intensity. While bits of distorted electric guitar riffage do pop up from time to time (as on “All My Asshole Friends”), in total, Girl Graffiti is sort of a late-night bedsit album, perhaps best enjoyed alone.

* thanks to several readers who corrected me.