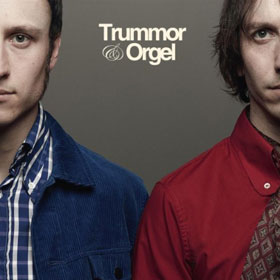 The Hammond organ occupies an important place in music. Beyond its use in gospel music, the instrument has long been established as the centerpiece in soul, blues, jam band and rock music. Its exponents are legion: Jimmy Smith, Felix Cavaliere and Gregg Allman are but three very different yet important players closely linked with the Hammond. Capable of amazing expressiveness thanks to its tone wheels and rarely-duplicated “waterfall” keyboard action, the Hammond remains the sonic standard for many keyboard players, even if they don’t always use the actual instrument.

Modern soul/funk/boogaloo acts make those Hammond sounds a part of their music, too: The New Mastersounds (England) and The City Champs (Memphis) build their distinctive sounds upon the organ’s tone colorings. And now we have another innovative act using the Hammond: a pair of Swedish brothers with the surname Ljunggren, Trummor & Orgel bring the breathtaking sounds of the Hammond organ to the fore on their fourth long-player, Out of Bounds.

An instrumental disc, Out of Bounds trades in a wide variety of styles. “Worlds Collide” sounds like the ultra-groovy theme song to an action thriller; insistent jazzy drum work and a gurgling synth line lay out a bed that allows some impressive speed-soloing on the keys.

Organ-and-drums duos are — for good reason – something of a rarity. A typical keyboard player in a standard band lineup can focus on rhythm parts, occasional leads, and sonic filigree. And the drummer can lay down a steady beat. But when all there is onstage is the two of you, it’s a much different story: the organist has to handle all of the musical elements, including working in that integral bass part (often with the Hammond’s pedals). And the drummer can’t be content simply to keep time; much more expressive stickwork is required. Trummor & Orgel are up to that task, placing them in that rarefied air along with Lee Michaels and Frosty and select few others.

Possessed of a jazzy feel without actually playing jazz, Trummor & Orgel (translates as “drummer and organist,” I’m pretty sure) keep things interesting without the benefit of vocals or lyrics. The dynamics of the songs create their own mental landscapes in the listener’s head. And the specifics — like, “is that wobbly sound a Theremin, an analog synth or a piece of sheet metal on ‘Some Friendly Advice’?” – matter less than the overall feel. Plaintive, dreamy pieces like “The Wheel” set up a nice contrast with kinetic numbers like the title track (another stylish and cinematic number). In turns exciting, sexy and soothing, Out of Bounds is as thrilling an instrumental collection as you’re likely to find in 2011.