CD Review: Vegas With Randolph – Above the Blue 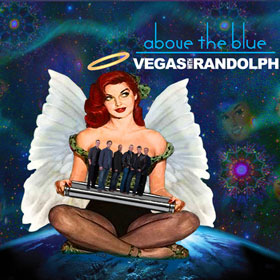 Comparisons to Fountains of Wayne are inevitable: strong melodies, well-thought-out vocal harmonies, middling tempos, clever lyrics, high-octane guitars. That’s the recipe on Above the Blue from Washington DC-based Vegas With Randolph. But VWR have their own distinct style; that the New Jersey band comes to mind when hearing their music says more about what passes for tuneful rock these days than anything else. I’d argue that we need more bands covering this musical territory.

In fact Vegas With Randolph does more than just deliver rock-and-wry on Above the Blue. While the title track starts out sounding like a plaintive son-of-Strawberry Fields, it quickly takes off into a high-velocity powerpop song. All the instruments are chugging along; each is doing its own thing, but it all comes together.

The liner notes by radio DJ Mike Lidskin assert that (a) the lyrics on this record are worth listening to, yet (b) you can ignore ’em and simply rock out. He’s right on that score; the album is successful on any number of levels, suggesting that it will wear well on repeated listens. There’s variety of texture throughout the record: plenty of power chords are applied across the tracks, but splashes of various classic keyboard sounds add welcome dimension to the songs.

Some of the songs concern themselves with universal themes such as love (“Supergirl”), while others extoll the joys of family (“The Sippy Cup Song”). And while the latter could have ended up a bit cloying, in the hands of these guys, it does not: quick-shifting tempos keep the listener on their toes.

Even the production vibe varies to suit the song. “A Lesser Fool” starts out with an intimate, close-up feel in sync with its subject matter; as the song unfolds, the arrangement goes big and then fades out. While the band has the chops to deliver the songs with style, they’re unafraid to bring in auxiliary players to suit their ends. That means that a lovely female vocal part from Maxi Dunn adorns “A Lesser Fool.”

The band all but insists on Fountains of Wayne comparisons by crafting a love song to a well-known actress on “Marisa.” But the song’s too good to have left off just because it sounds like those other guys. “The Tree Song” heads in a different direction: plaintive, gentle vocals with acoustic guitars and real orchestration. The change of pace is effective if wholly unexpected.

An extended suite called “Double Play” takes up the final eleven minutes of the record. Featuring a number of songs clocking under two minutes each (plus a few longer ones), it’s similar in its goals to the second side of the Beatles‘ Abbey Road: the songlets tumble into one another, creating something greater in the process. It’s similar – though not overly so – to the approach Lannie Flowers uses on his Same Old Story LP. The “Double Play” suite dials back the powerpop in favor of something grander, soaring, majestic. Perhaps the strongest track on the whole record, “Light of Day” has one of those circular chord progressions that could go on for days without wearing out its welcome.

From a musical standpoint, Washington DC is often thought of mainly as the home of a particular brand of hardcore (see: Fugazi). But the city has a proud if under-appreciated powerpop pedigree, having started Tommy Keene on his musical path. Keepers of that flame, Vegas With Randolph is a band to watch.