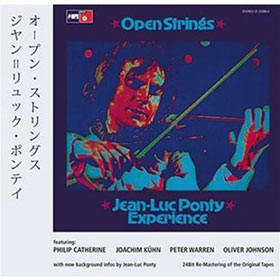 To fans whose interest in this violinist falls anywhere short of the label hardcore, Jean-Luc Ponty is best known as either (a) the guy who worked with Frank Zappa in the late 60s/early 70s or/and (b) the guy who created a successful series of jazz/rock/pop/fusion crossover albums in the 1970s. But before either of those activities, the French fiddler was more of a straight-ahead jazz player.

Between his first time with Zappa (he would soon return) and his stint with Mahavishniu Orchestra, Ponty released a straight (if free) jazz record. On his 1972 album Open Strings (credited to the Jean-Luc Ponty Experience) he plays some lovely, not-terribly challenging jazz figures on “Flipping, Part I.” But then things get a little weird: “on “Flipping, Part II,” Ponty kicks off the song sounding more like Larks Tongues in Aspic-era King Crimson. As the track unfolds, it’s closer to the sounds he brought to bear on Zappa’s 1969 album Hot Rats.

For the first five minutes of “Flipping, Part Two,” the instrumentation is mostly limited to piano, bass from Peter Warren, Oliver Johnson’s drums, and Ponty on violin. But around the five-minute mark Philip Catherine injects some bop electric guitar runs. This is followed by a contemplative solo piano section courtesy of Joachim Kühn. Then Ponty takes a soaring solo himself, while the other players work their way back into the piece under him. Parallel ascending figures from Ponty and Kühn end the piece on a sweeping note.

An overlapping dialogue (argument, really) between plucked violin and stinging, distorted guitar is the centerpiece of “Flipping, Part III.” Some free jazz riffing from Catherine is answered by some splashy drum work, and all that is followed by some out-there piano trilling. Little in the way of conventional melody is found for the next few minutes, but then that clearly wasn’t the goal.

The original vinyl (clearly mimicked in the 2011 packaging and design) ended there, with the three-track suite making up all of Side One. The second side is built around the nearly-fifteen-minute title track. While all of the players are given (or take) a turn at the spotlight, Ponty’s violin is the central element. A jazzier corollary to some of Zappa’s work, the long instrumental suggests what Zappa might have sounded like had he pursued jazz more intently.

The album closes with Kühn’s “Sad Ballad.” As the detailed liner notes explain, in concerts of the era, Ponty’s band played “Open Strings” and “Sad Ballad” as a set. In contrast to the preceding flights of free jazz, the first part of the piece represents the most melodic music on the set, but this track, too heads into unexpected areas.

Open Strings represents Ponty’s final album in the free jazz style; his next release was the breakthrough Upon the Wings of Music, a record that established his commercial and critically-successful fusion sound.