CD Review: Fall on Your Sword – Another Earth (OST) 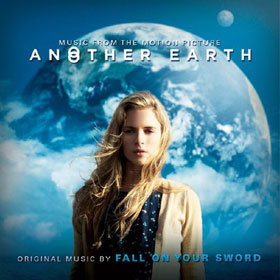 When a filmmaker chooses a single artist to provide soundtrack music, he/she is taking a big risk. This approach stands in direct contrast to the tried-and-true method (popular in the 80s) of assembling a bunch of hits and potential hits by au courant pop stars, slapping a cover on it, and raking in the ancillary sales.

The advantage to working with one artist, however, is clear. The music is more often than not composed specifically for the film, so some sort of thematic linking occurs. There’s the unity of vision that comes with working with one writer/performer. But quite often the result of this approach is a collection of music that works well as the film’s literal soundtrack, but less so as music standing on its own.

Mike Cahill’s new film Another Earth is sci-fi/fantasy, but apparently it’s more character- and story-driven than it is built around some exotic imagined technology. He chose to work with the duo of Will Bates and Phil Mossman, collectively known as Fall On Your Sword. The duo is most well-known for their work on television commercials and similar projects; this album represents their first full-length release. The music FOYS has created is a sort of organic take on synthetic sounds.

Lots of blobbing analog synths bleat their way along across the CD titled Music From the Motion Picture Another Earth. Skittering, stuttering, pulsing…those are the sort of adjectives best used to convey the vibe found on these nineteen tracks. Primarily instrumental, the tracks fold in some lovely cello, violin and viola amidst the synthesizer washes.

Some of the pieces are static (as in, barely moving), and these – especially “Naked on the Ice” – call to mind some of Brian Eno’s work on his landmark Another Green World. Some lovely, wordlessly yearning vocalizing courtesy of Inna Barmash adds to the mood, especially when laid atop some choir samples and throbbing synth arpeggios.

There’s a contemplative, sorrowful ambience to several of these tracks, most notably the brief, piano-centric “The House Theme” and “Making Contact.” The vaguely worldbeat percussion feel of “I am Over There” creates a sort of a dialed-down house/rave feel; one can imagine a bunch of strobelight-entranced ravers, but instead of dancing, they’re lounging in oversized, cushy chairs.

As one might expect from these brief descriptions, the tracks on Another Earth float by, tumbling into one another. The feel of each track is (one imagines; I haven’t seen the film) suited to the concurrent onscreen scene, all of which suggests this is a sad and melancholy bit of filmmaking.

As a blending of classical drawing-room instrumentation and modern technology in an ambient setting, Another World is quite successful. As an aural background (for the film, or for whatever you might be doing while the CD spins) it’s also effective. As the focus of close, attentive listening, it’s perhaps something of a mixed bag, but on balance it’s reasonably rewarding on that score as well.

Update/clarification: additional music by other composers (see comments) is on the film’s (literal) soundtrack but not on this CD.