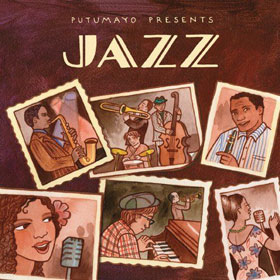 To my way of thinking, CD releases on the Putumayo label occupy a specific market niche. Generally speaking, they are not designed as potential additions to the music collection of serious/hardcore music fans. That’s not to say they’re not without merit; not at all. It’s merely to point out that what a Putumayo release offers is something unique, something different from the mainstream.

In 2011 Putumayo offered a title called Putumayo Presents Jazz. Unlike some of the label’s other collections, this one casts an hopelessly wide net. Their rhythm & blues collection sought to bring together some of the biggest names currently working in the genre. Putumayo Presents Yoga offered music ostensibly well-paired for some time spent on the yoga mat. Another collection surveyed the current pop music of India, and yet another – Putumayo Presents Jazz Around the World – looked at the manner in which artists outside the USA approached this American art form. All were clear in their goals and (to varying degrees) successful in their execution.

But with Putumayo Presents Jazz, what can the listener expect? As Joel Dinerstein’s liner notes explain, “Many of the songs in this collection are gems from the ‘great American songbook.’” Well, fair enough. It’s perhaps not worth quibbling over, but a more descriptive title might have telegraphed that; unwary listeners might otherwise have expected Miles Davis or Sun Ra, for that matter.

Instead we have in front of us a set of twelve songs that – for the most part — put vocal performances front and center. As a quick and shallow survey of vocal jazz, this set succeeds. There are tracks from Nina Simone, Louis Armstrong, Nat King Cole’s trio, Chet Baker and Billie Holiday. If your thing is jazz with vocals, those will please you; their classic status is beyond question.

And if instrumental jazz is more to your liking, there’s Cannonball Adderley’s version of Bill Evans’ “Waltz for Debby” (with Evans himself on piano). With the exception of that track, there’s little in the way of challenging music on Putumayo Presents Jazz. But then, to the extent that one would know what to expect from such a broad-brush title, “challenging” likely wouldn’t be one of those things.

As the backdrop to a nice dinner, or an evening of cocktails and conversation, this disc would fit the bill nicely. As a conversation starter, it might be a notch less successful. And as an excursion into the wide world of jazz, it’s less than compelling.

But ultimately Putumayo Presents Jazz should be viewed (and reviewed, and listened to) in the spirit intended. So notwithstanding my suggesting that a better title might have been Putumayo Presents Classic Mostly Vocal Pop-Jazz, this is an enjoyable set of music.