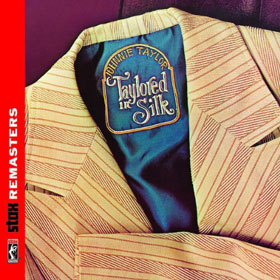 Johnnie Taylor is best known for his 1968 Stax hit “Who’s Making Love,’ and nearly as well-remembered for his mid-70s disco hits, including the regrettably-named chart-topper Eargasm. But in between those, he made an album that bridged the styles. 1973’s Taylored in Silk found the versatile singer serving up eight tracks of, well, silky-smooth soul. The tracks aren’t the most original in their sonic delivery – the arrangements are quite similar to what one would have found on countless r&b albums of that era – but Taylor’s assured and earnestly emotional vocals render even the most pedestrian material a few notches higher in quality.

Thankfully, there’s little in the way of pedestrian songs on Taylored in Silk. “Starting All Over again” sounds like a hit, and it was…but for somebody else. The song had been cut in 1972 by Stax labelmates Mel & Tim, and it soared to #4 on the r&b charts. Taylor’s version is effective, and the sweeping strings are a lovely backdrop to his heartfelt delivery. “Cheaper to Keep Her” is a bit Vegas-y but fun nonetheless. The low-key, slow jam of “Talk to Me” would make a great background for a romantic scene in a film. “I Believe in You (You Believe in Me)” sounds like a hit as well, with strong echoes of The Staple Singers; perhaps the writers (and/or arrangers) of the Elton John/Kiki Dee hit “Don’t Go Breaking My Heart” listened to this track.

There’s nothing as funky her as “Who’s Making Love,” but then that hit wasn’t representative of the style with which Taylor was most comfortable. But for smooth, radio-ready r&b/soul of the early 70s variety, Taylored in Silk is an exemplar. Neither the rarest nor most easily found of old Stax vinyl records, the album was ripe for remastering and reissue.

Thanks to Concord for doing so in 2011, and appending the relatively brief original running order with a half-dozen bonus tracks. These are the a- and b-sides of three Stax singles Taylor released in 1971-73. A-sides “Hijackin’ Love” and “Standin’ in for Jody” both charted on the Billboard Hot 100, and as best as I can tell, neither has been issued on CD until now.

Bill Dahl’s excellent liner notes are worthy of mention: Dahl wisely spends as much ink putting the singer’s work into larger context as he does addressing the album itself. And with Concord having access to Stax masters, this is no needle-drop reissue: the sound is predictably stellar.