EP Review: The Wicked Whispers – The Dark Delights of… 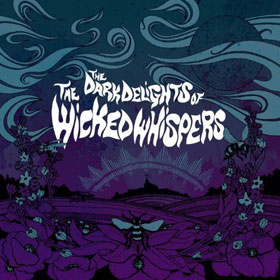 Take the edge-of-macabre organ stylings of The Doors and apply it to a slowly swaying, retro-jangle with a British accent. Add some plaintive harmonies and a slightly modern sensibility a la House of Fire’s overlooked 2008 album, and what you end up with is Wicked Whispers. On their debut EP The Dark Delights of the Wicked Whispers, the group is careful not to offer up anything too new, and that will suit plenty of listeners just fine. They’re from Liverpool, but they don’t sound a whole lot like what they call “that other group” from their hometown.

There’s a dreamy, swirling ambience on all five tracks. A bit of sunshine pop creeps in, but the group’s sound remains solidly structured around the broken-chord Farfisa organ work of leader/songwriter Michael Murphy.

With a title like “Amanda Lavender” you’ll have some idea what to expect. The song gently ebbs and flows, and there are many elements here to hook the listener: the organ lick and the chorus harmonies are but two.

“House of Peppermint” kicks off sounding a bit too much like “Amanda Lavender, Part Two” with different lyrics. Same key, similar organ run. As the track unfolds, it goes some slightly different places, but one wonders if some more creative track sequencing should have been considered.

“Flying Round in Circles” changes key and time signature, thank goodness. The waltzing number has a vaguely folk-rocking edge (or, more precisely, lack of edge), not wholly unlike Fairport Convention…with a Farfisa.

On “Odyssey Mile” the band finally kicks into gear, employing a stomping beat (and even a brief bass solo line), but any potential heaviness is leavened by Murphy’s “riding on a unicorn” lyric (no, really). But befitting that other group’s legacy, the four songs on The Dark Delights of the Wicked Whispers are short and to the point. Time will tell if the band is able to expand on their approach and craft a full album’s worth of music. The style’s great and the execution is precise; it’s more variety that’s needed. Worth watching.