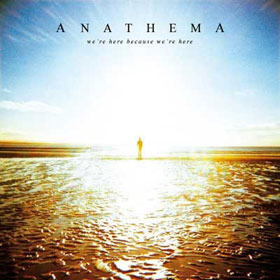 With a sound redolent of the more creative end of modern rock — think Porcupine Tree, The Pineapple Thief, Radiohead, Sigur Ros – crossed with the more adventurous end of (here’s that dread phrase) classic rock – think here of Pink Floyd – Anathema has crafted an enduring work that sustains itself across ten-plus songs.

Not unlike Radiohead’s OK Computer in the sense that the songs tumble into one another, creating an overall effect without always distinguishing themselves as individual tracks, We’re Here provides the sort of dramatic flourishes that will keep a first-time listener’s attention. Female harmony vocals add a warm ambience to the sweeping, amped-up-Coldplay “Summernight Horizon.”  Stuttering yet insistent drum and piano patterns anchor the tune while vocal harmonies soar above it.

“Dreaming Light” is a highly memorable song, full of drama and yearning. Vincent Cavanagh’s lovely lead vocal and an understated yet majestic melody conjures that waving-lighters-at-the-concert ambience. The track’s shimmering lead guitar is a thing of beauty, and the song begs for repeat listens.

That plaintive lead vocal and piano combination is a hallmark of We’re Here Because We’re Here, as is the female vocal harmony (courtesy of Lee Douglas). More than a mere collection of songs, the album defines a style and then delivers songs to fit it. “Everything” is only a notch less immediate a number than “Dreaming Light,” but again it blends the album’s trademark elements into something very appealing. There’s plenty of guitar here (and throughout the album), but the instrument is used more as an ambient element, providing texture more than the actual melody (piano and vocals take care of that).

The synthesizer pads, organ, ghostly guitar figures and spoken-word of “Presence” call to mind the ambience – if not the actual sound – of Wish You Were Here-era Pink Floyd. Some beautiful string work only enhances the tune, as Lee Douglas adds some spare lead vocals.

The melody of “A Simple Mistake” unfolds slowly, but once it does, it creates something quite appealing. Lee Douglas’ vocal countermelodies add a layer of subtle complexity to the song. A more progressive and harder-edged arrangement takes over for the song’s second half; somehow the transition to the chunkier delivery comes off as wholly natural.

“Get Off Get Out” stakes out a lyrical and arrangement style similar to Blackfield’s “Go to Hell,” but folds more melody into the mix. The song builds to spotlight some dramatic guitar work. “Universal” paints a sonic portrait of sadness and desolation; sweeping strings and soaring harmonies come together nicely. And like most of the tracks on We’re Here Because We’re Here, the song develops – goes somewhere – and takes the listener along.

The ambient sounds that kick off “Hindsight” again recall Pink Floyd, but not in a derivate manner. The song unfolds to reveal a soaring guitar solo of the sort one might expect from Steven Wilson or David Gilmour. It goes on and on, yet it never threatens to overstay its welcome. The song — the album’s closer – fades away, taking its weet time to do so.

Three bonus tracks are appended to the US release of We’re Here Because We’re Here. The demo mix of “Angels Walk Among Us” doesn’t sound at all unfinished, or less produced, than its official counterpart; it’s just different, and equally worthwhile. The same is true of the demo mix of “Presence.” Here the spoken word part is dialed back, and the static, Eno-esque melody is brought forward. (It’s also in a different key than the official version.) The demo mix of “A Simple Mistake” is inferior to the official version, and suggests a work in progress. It’s still nice to have, providing as it does a brief glimpse into the development of the album.

Reliably precise, warm and clear mixing from Porcupine Tree’s Steven Wilson no doubt makes the band-produced We’re Here Because We’re Here even better sonically that it would have otherwise been. Anyone who got on board twenty years ago when the Liverpool band debuted may well wonder what ever happened to that aggressive, angry band. The answer seems to be that they grew up. We’re Here Because We’re Here subtly incorporates some of the sensibility of Anathema’s hard-edged past into a highly melodic work that will remind older listeners of what was (and remains) so special about “album rock.”