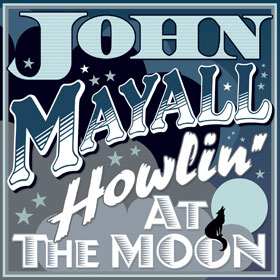 John Mayall is often labeled a father of the British blues movement, and he earned that title long ago. Born in 1933, Mayall was always older than most of the musicians with whom he’d work. Some have taken issue with his supposedly limited talents as a vocalist and musician, but few with any sense would argue against him impeccable taste and vision in terms of his hirings. The list of Mayall employees over the years is a veritable who’s who of the British rock and blues scenes. The full list of notables would fill an entire blog entry, so let’s just mention Eric Clapton, Peter Green, Mick Fleetwood, John McVie, Jack Bruce, and Mick Taylor. There have been many, many others.

Mayall has never been a slavish devotee to rote blues stylings. Even on his landmark 1960s albums he made use of unusual instruments, and often plays odd, custom guitars with extra strings. His classic “Room to Move” eschewed percussion altogether at a time when rock and blues were all about the heavy beat. He’s continued to record and release albums well into the 21st century.

Back in 1984 or so, when I worked at a record store (yes, that credit seems to be a required part of any music critic’s curriculum vitae) I was lucky enough to score a German import box set of Mayall’s first fourteen vinyl albums, including the oft-overlooked live debut, 1964’s Mayall Plays Mayall. And I saw the man onstage with a fairly anonymous (yet typically stellar) lineup in the 90s.

2011 sees the re-release/repackage of the second disc of an earlier set called Rolling With the Blues; in its newest permutation this latest set is titled Howlin’ at the Moon, and it’s well-deserving of release on its own. Not everyone is willing to plunk down the cash required for a live set of Mayall spanning two CDs and a DVD.

Howlin’ at the Moon collects ten songs from five different concerts between 1980 and 1982; all of these shows were in the USA or Italy, before appreciative audiences. The live sound is clear and consistent: not exceptional in any way, but also not lacking in sonic quality. For these tours, Mayall reunited with some of his past sidemen. Half of the tracks feature Mick Taylor; as a very young man, Taylor had served as the lead guitarist in Mayall’s Bluesbreakers 1967-69. Several tracks also feature bassist John McVie, a longtime Bluesbreaker who would (with drummer Mick Fleetwood) leave to form Fleetwood Mac.

Keeping with Mayall’s slightly nonstandard approach to the blues, these dates feature plenty of electric piano and clavinet (courtesy of Mayall himself), giving the songs a feel a bit like Rough and Ready period Jeff Beck Group. There’s plenty of tasty guitar soloing, lots of harmonica and sax…in short, everything anyone would want from a John Mayall collection. “Mexico City” features a pretty groovy bass solo (though, it should be noted, not by McVie).

Mayall’s voice can be a bit wearying at times, and the version of “Caught in the Middle” here is a case of this, but the joy of a tune like “John Lee Boogie” features Mayall in fine voice with some serious harp blowing and mean keyboard. A full-band version of “Room to Move” is quite tasteful in its adding of instrumentation to what is generally thought of as a very spare tune. Mayall and band find new places to go with the song here.

A version of Freddie King’s “The Stumble” closes the set in rousing manner. Now, I’ve always favored the 60s guitar work of Peter Green over Eric Clapton, and the Bluesbreakers version of this tune (on A Hard Road) is a large part of the reason why. Here it’s Mick Taylor burning up the fretboard. Mayall rips up the piano as well; this is the sort of song one wishes would never end.

Mayall’s been nothing if not prolific. There are many choices for the consumer wishing to sample his work. Some are excellent, some are forgettable. Thanks to the song selection and lineup, Howlin’ at the Moon can safely be recommended to both longtime fans and Mayall neophytes.