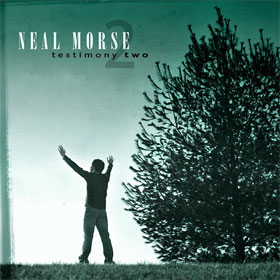 As something of a collector of obscure rock of the 1960s, I delight in an unofficial set of six CDs called Psychodelicias. It’s a collection of garage-rock, psychedelic, pop-sike and other related styles, all by artists from Spain or South America. For the most part, the vocals are in Spanish, and the fact that I don’t know what they’re singing – those three years of Spanish in high school helped only so much – lessens my enjoyment not a single bit.

A sort of inverse situation exists with regard to the sprawling new 2CD set from former Spock’s Beard front man (and sometime member of Transatlantic) Neal Morse. Titled Testimony Two, the title telegraphs where we’re headed on this latest outing from the progressive rock musician. Impeccable vocal harmonies, ambitious arrangement in the style of early Genesis (albeit with a more pop-song conventional bent) and excellent playing and arrangement are all on full and ample display throughout Testimony Two. If the album were sung in Spanish – or any language besides English, I’d probably be blown away by it. But I do know what he’s singing about, and it’s enough to offset the album’s considerable positive qualities.

He’s preaching, testifying. For adherents of Morse’s brand of owing-it-all-to-his-god religious conviction — for which I do not begrudge him – this is a winning album, I’m sure. For those who buy into – or who are at least comfortable with — his proselytizing and enjoy prog, this is probably a five-star release. But let’s be realistic: how many of those type people actually exist?

For fans of progressive rock who don’t especially want equal parts prog and preaching, Testimony Two is problematic. Long instrumental passages (as on the typically pretentiously-titled “Part Six: Overture No. 4”) are nothing short of beautiful, majestic, and exciting. Morse tells his story about – among other things — the conflicts he felt between playing the Devil’s music with Spock’s Beard and trundling off to church. One supposes this is all of great interest to modern-day members of the various Jesus fan clubs. To the rest of us, and/or to those who’d rather not combine religion and rock, not so much.

“Part Six: Time Changer” makes it clear that Morse is a huge fan of Free Hand-era Gentle Giant; he mimics that band’s acrobatic vocal style ably, but his lyrics take all the fun out of it. He doesn’t, however, seem to have taken note that two great artists — Bob Dylan and Little Richard – were at their worst when they turned to the humorless, religious side of things. And if anyone hasn’t been hit over the head by Morse’s lack of lyrical subtlety, “Part Seven: Jesus’ Blood” should correct that situation. If not, there’s always “Part Eight: Jesus Bring Me Home.” In the former, Morse hopes that Jesus can cure his daughter’s heart defect. (Not to spoil the story, but he believes Jesus did just that.)

Morse certainly gets points for earnestness and conviction. And in some quarters he’s getting props for crafting in Testimony Two an edgy work of some significance. Most contemporary Christian music betrays a near-total lack of originality, especially in the lyrics department (but to be fair, penning CCM lyrics is akin to writing only love songs, all of them about one girl). To his credit, Morse has impressive musical ideas, and displays them amply on this set. Still, for the less Christian-inclined fan, nearly two hours spent with Testimony Two may lead you to reach for a Blue Öyster Cult album to cleanse your palate, as it were. In the meantime, if there’s ever an instrumental remix of this disc, I’ll buy.