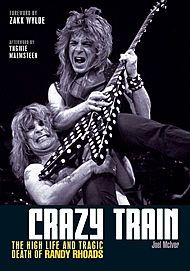 I was late to the party: I had amassed a collection of several thousand albums (vinyl and CD) before I even gave a serious listen to Black Sabbath. An acquaintance who knew of my musical likes and dislikes had wondered aloud why I didn’t listen to the band. He lent me an LP or two, and I dutifully played them. And I quickly experienced an “aha” moment; why hadn’t I listened before? In short order I had run down copies of all of their Ozzy Osbourne era albums (up through Never Say Die; I did not dig the Dio era) on both formats.

Against that backdrop it’s needless to say that — even though it was on the radio quite a bit when I was in high school and college — I gave absolutely no attention to Ozzy’s post-Sabbath recordings. Sure, I heard “Crazy Train” on the radio now and then, and knew that it was somehow different from, say, “Iron Man,” but it didn’t pique my interest.

As a result, I was completely unaware of the name – let alone the work of – Randy Rhoads. I didn’t know anything about his guitar prowess, and honestly don’t recall hearing of his tragic death in 1982. To quote Darth Vader Dick Cheney, I guess I had “other priorities.”

That situation has been partially corrected now, thanks to a read through Joel McIver’s Crazy Train: The High Life and Tragic Death of Randy Rhoads. Across two hundred-plus pages McIver recounts Rhoads’ life, with specific attention given to his electric guitar playing era. First with an early lineup of Quiet Riot, then with Blizzard of Ozz (aka Ozzy Osbourne and other guys), Rhoads made quite a name for himself with his classically-based shredding guitar style. His playing influenced a long line of guitarists, many of whom I’ll admit I have either no interest in (Dave Mustaine of Megadeth) or an active dislike of (Yngwie Malmsteen; I mean…c’mon). But as is so often the case, the artist doing the influencing is better than those being influenced. McIver makes the point that Rhoads’ style was equal parts speedy technical brilliance and melody.

The book is a pretty quick read, and as the first comprehensive look at the guitarist’s life and work, it is to be commended. There are some weak points, however: chief among these is the author’s predilection for reproducing interview quotes in (presumably) unedited form. Now, when we speak, we often circle back on ourselves, saying the same thing more than once: “He was a great guy, I tell ya. Blah blah blah [a couple hundred words]…he was a great guy.” Most authors would hack that down, break it up, contextualize it a bit. McIver chooses to drop the whole thing in. And he does this repeatedly throughout the book.

As a result, Crazy Train comes off more as a string of quotes (admittedly, they’re quotes from people who knew Rhoads, not from a parade of so-called experts) with the barest of writing to tie them together. It’s clear that McIver knows his stuff, but Crazy Train often fails to follow the “show, don’t tell” rule of journalism. That said, there’s plenty here in the way of interesting information.

Yet the reader has to wade through some dross to find it. Because of McIver’s no-editing style, at the tail end of a reasonably enlightening quote about Rhoads from Zakk Wylde, we are treated to this gratuitous quote from the axeman: “Talking of which, I gotta go. I’m gonna get a cold beer and stick my tongue up my wife’s ass.” Now, I’m not easily offended, and the quote is (almost) a little funny, but its inclusion in Crazy Train adds nothing of value, and interrupts the flow of the story. It, shall we say, leaves a bad taste in the reader’s mouth.

Moreover, early on in the book’s pages, McIver goes to some length to warn the reader he is not setting out to paint Rhoads as a saintly figure. With that caveat out of the way, he does just that, highlighting Rhoads’ love of family, fascination with model trains, disinterest in the drug scene, etc. (Randy probably liked kittens, too, one supposes.) Then, when wrapping things up, McIver tells the reader (in so many words) “See? I told you I wouldn’t make him out to be a saint.” It’s kinda like that.

Those flaws cannot help but detract from an otherwise thorough and clearly well-researched book. The flaws may well be of less notice to non-writers, to those who come to the book to learn more about a musician cut down in the prime of his life and career. (Rhoads’ death has more in common with the fates that met Buddy Holly, Otis Redding and Stevie Ray Vaughn than, say, Jimi Hendrix, Janis Joplin or any number of Spinal Tap drummers.) And it is for those fans that Crazy Train has been written.

Taking into consideration the criticisms and warnings herein, Crazy Train: The High Life and Tragic Death of Randy Rhoads still receives a qualified recommendation. It’s primarily for fans of the guitarist and the metal genre, but – thanks in part to its relative brevity – is a worthwhile read for casual music fans.