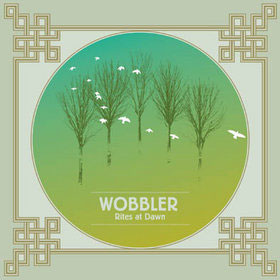 Did you hear the news? Musical archivists recently discovered a completed-yet-unreleased master tape for the album Yes recorded during the long break between Relayer and Going For the One!

Well, okay, not really. And in fact it’s selling Wobbler a bit short to characterize their new album Rites at Dawn as a Yes ripoff. Not that there’d necessarily be all that much wrong with such an approach: muscular bass lines, high-wire vocal melodies, catchy melodies and twist-n-turn arrangements often make for a tasty menu of progressive rock. But Rites at Dawn has more going for it that that.

This Norwegian five-piece is merely the latest piece of solid evidence to support my argument that 21st century prog rock (of a sort with a clear debt to its 1970s ancestor) is alive and well and living in Europe. Their sound is unapologetically derived from the classic styles of forty-or-so years ago, and, really, what’s so wrong with that? I mean, when’s the last time you heard a really compelling new song from Yes? [UPDATE… Answer: July 2011. — ed.]

Rites at Dawn kicks off with a very short instrumental mood piece; “Lucid” sounds like a snippet of I Robot-era Alan Parsons Project, all airy and placid yet slightly foreboding. It signals the coming of something, but we know not what.

That something is “La Bealtaine,” a longish piece that quickly announces the return of prog. Within its first minute we hear the rumbling, trademark tones of the Rickenbacker bass; the crackling tricky percussion favored by the likes Bill Bruford; no less than three keyboards (Mellotron, harpsichord and analog synthesizer); and upper-register vocals.

So it’s like that, is it? Sonically Rites at Dawn most closely resembles Tales From Topogrpahic Oceans (my least-favorite classic-period Yes album, by the way), but it’s free from the graphic torpor (heh) of that album’s overblown, overlong compositions. The songs on Rites at Dawn bear an economy of style closer to The Yes Album.

I apologize for coming back again and again to Yes as a musical touchstone, but the similarities are unmistakable; Wobbler clearly could get work as a tribute band if they took the time to learn “Starship Trooper.” (Yeah, like you’re gonna tell me they don’t already know every note of it.)

Andreas Strømman Prestmo’s vocals are a tad less assertive than Jon Anderson’s, so even though he’s mixed clearly, his voice ends up serving more as an instrument than a lyric delivery system. Those lyrics do indeed deal with themes familiar to 70s prog fans. The longest track on the disc, “In Orbit” starts out with some lovely acoustic guitar and orchestral instruments (flute and bassoon) but quickly moves into heavier territory. There are the requisite “movements” in the arrangements, and plenty of the contrast (fast/slow, loud/quiet, hard/soft) that prog fans demand. But all those qualities are delivered in the context of pleasing melodies: the instrumentation will please adherents of the classic style (especially keyboard boffins), but those in search of a nice melody won’t come away disappointed.

The songs float by fairly quickly, and while none of them may leave an indelible mark the way something like “Roundabout” did on your first listen, the net effect is very appealing, and Rites at Dawn is an album that fans of the style can (and likely will) return to for many repeated listens.

The disc is structured like an LP, with a little horizontal rule dividing the list of the first three songs from the last four. “This Past Presence” has lots of shimmering acoustic guitar, flute and Mellotron, but it too develops into something else: Lars Fredrik Frøislie seems intent on proving that his keyboard collection is as large as that of, say, Pär Lindh.

If one had any doubt that Wobbler is unashamedly mining the 70s prog aesthetic, such doubts would be put to rest for good after hearing “A Faerie’s Play.” In fact the title alone should clear things up, but the song trills along, exploring the texture and depth that one would expect. While everyone plays well – and in places, in a manner approaching virtuosic – everything holds together well; the tracks on Rites at Dawn aren’t mere player’s showcases. They’re real songs, expertly arranged. Nobody fights for musical supremacy; in particular, guitarist Morten Andreas Eriksen’s work is impressive yet understated.

“The River” is another longish tune that aims for a style between Yes and King Crimson (and no, that doesn’t mean it sounds like something off Lizard). More than any other track on Rites at Dawn it employs the start/stop method. And effectively so. The disc wraps with the aptly-titled “Lucid Dreams,” a bookending piece sonically linked to the disc’s opener. With hints of what sound like (but seem not to be) vibraphone, the track is sort of a come-down, a musical outro that prepares the listener for his (or, less likely, her) journey back toward more mainstream (and ultimately less impressive) musics by other artists.

When I was in high school, our art teacher would let students bring in albums (we’re talking vinyl here) and spin them during her class. The people who most often took advantage of this privilege were prog fans, so – whether we wanted it or not — we got to hear a lot of Yes, ELP and so forth. Those guys would play “air Moog” and jerk their heads around in futile (yet hilariously entertaining) attempts to follow the tricky path of the music. It’s impossible for me to listen to Rites at Dawn without an involuntary conjuring of those memories.

I generally don’t like to quote press kits, but there’s a line in the promo for Wobbler’s album that’s so good I must make an exception: “Even though this is the kind of prog connoisseurs will stroke their beards appreciatively to, it is also prog their girlfriends will like.” I’ll get back to you on that.