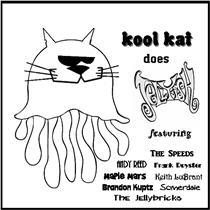 I’ve made my thoughts on the subject clear many times before: I look askance at tribute albums. There are simply too many opportunities to go wrong with such projects. And so most of them are pretty weak stuff. Occasionally, one comes along that offers something worthwhile.

The Kool Kat label is one of powerpop’s most consistent champions. A look at their offerings almost always turns up some interesting product; recent releases from Frank Royster, Maple Mars, The Goldenhour, The Genuine Fakes and Martin Newell’s Cleaners From Venus are just some of the fine titles on offer.

An oft-used Kool Kat strategy is to offer a free bonus CD with the purchase of selected titles. Recent offerings from Nick Lowe (among others) have included a bonus to sweeten the deal. Their latest brings together both of these approaches.

Awhile back a label called Burning Sky featured a disc called Sensory Lullabies: Tribute To Jellyfish. Now out of print, that title goes for upwards of $25 if you can find it (which, for the most part, you can’t. MP3 doesn’t count.) When Kool Kat sold that title, they threw in a little comp EP of their own called (naturally) Kool Kat Does Jellyfish. Artists on their roster took a crack at the well of ear candy that was the Jellyfish catalog.

With the Burning Sky title unavailable, Kool Kat is now making their own comp available as a free bonus with the purchase of any other title. Now, to be fair, Jellyfish only released two official albums of original material in their brief time together, so it’s not wholly unexpected that there will be some overlaps in song selection between the Burning Sky comp and the Kool Kat one. But the eight tracks on Kool Kat Does Jellyfish are worthwhile on their own.

The Speeds tackle “That is Why.” A hallmark of the Jellyfish original was its melding of bombast and soaring power chords and melody. This cover essentially ignores the bombast and concentrates on the other qualities. The end result is a song that’s weaker out of the gate compared to the original, but still enjoyable.

The melodramatic “Glutton of Sympathy” is a daunting track to attempt, but Andy Reed does an admirable job. Rather than reinterpret or reinvent the track, Reed follows the original arrangement closely, right down to the high harmonies and choice of instruments. Occasionally an acoustic guitar plays a lick that was electric on the original, but it’s otherwise a note-for-note copy, giving an unplugged spin to the song.

Frank Royster picks a lesser-known track; “Family Tree” was originally a Jellyfish demo that showed up on a compilation. It’s a rockin’, wood-block driven tune that mines a Free or Bad Company sort of vibe, and as such sounds pretty far from what most people would identify as the Jellyfish sound. And Royster’s voice – ideal for his own fine original songs – isn’t as well-suited for the kinds of more subtle vocal arrangements that were always a Jellyfish trademark. Extra points for the Brian May approach to the tail-end of the guitar solo, though.

Maple Mars’ sonic approach is perhaps among the closest here to that of Jellyfish. That group’s thorough (but not fussy) attention to detail means that their cover of “Russian Hill” has both arrangement and production values that effectively capture the spirit of the originals. Yet Rick Hromadka manages to bring his own identity to the song, chiefly through the qualities of his own voice.

If you’re gonna do a tribute to Jellyfish, you gotta include “Baby’s Coming Back.” It’s the group’s most infections tune, and the one – among many greats – most deserving of hit status. Keith LuBrant’s cover follows nearly every detail of the Jellyfish version, down to the backing vocal arrangement, the handclaps, and the lead vocal inflections. Of course that begs the why-bother question. The answer: don’t worry so much; just enjoy it.

Jellyfish’s yearning “I Wanna Stay Home” gets a carbon copy approach from Brandon Kuptz.  With the possible exception of Maple Mars’ track this is the number featuring the highest production values. Don’t get me wrong: there’s nothing raw or demo-ish on Kool Kat Does Jellyfish, but this is among the slickest. And when it comes to powerpop of the Jellyfish variety, that’s a good thing. Of all the artists unfamiliar to me, this is the one that most piqued my interest.

Somerdale takes a 90s grunge approach to “Bedspring Kiss,” giving it a vibe closer to some of The Posies’ harder stuff. Soaring harmonies leaven things, giving the track a nice balance of sweet and sour.

The Jellybricks take on Jellyfish at their most manic, covering “All I Want is Everything.” A slightly whiny, enunciated vocal that unfortunately reminds a bit too much of some unnamed pop-punk outfits mars the song a bit. But the high energy track is delivered with exuberance, which, in the end, is what’s called for.

At the special price of $0.00 (when you buy something else) it’s hard to beat Kool Kat Does Jellyfish for value. As a cross-section of contemporary artists who dig Jellyfish, it’s a worthwhile addition to your collection. Like most other tributes, it likely won’t change your life (for that, try Spilt Milk if you haven’t already) but it’s still fun. Available exclusively from Kool Kat Musik, HERE.