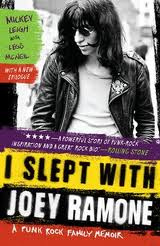 You know those cool Pete Frame rock family trees? One of those could come in handy when dealing with The Ramones. The group started with Johnny, Dee Dee, Joey and Tommy. When Tommy (i.e. the one in possession of what’s most conventionally known as talent) left, Marky took his place. Tommy came back at one point. There were also Richie and C.J. Ramone. Of course none of these guys are related; the Ramones name came from – of all places – a briefly-used early pseudonym used by a Liverpool England guitarist/bassist called McCartney.

A magic decoder ring might help readers early on when reading I Slept With Joey Ramone. After awhile, you’ll start to remember that when Mickey Leigh (more on him forthwith) mentions John Cummings, he’s referring to the guy we all knew (if not loved) as Johnny Ramone. And so on.

To further (at least initially) confuse things, this book, written by Joey Ramone’s brother, switches back and forth between real names and stage names. So let’s sort out the basics: Jeffery Hyman: that’s Joey Ramone. Mickey Leigh: that’s his brother Mitchel. And although Mickey Leigh is a writer – his monthly column “My Guitar is Pregnant” runs in New York Waste – I Slept With Joey Ramone is cowrtten with noted punk chronicler Legs McNeil.

That last detail gets a little weird when Legs — who figures into the story — is written about in the third-person. But let’s not quibble about the mechanics. This is a well-written book, a personal history of an important corner of rock’n’roll history. It’s a story you won’t get anywhere else.

I Slept With Joey Ramone is neither a worshipful ode to a fallen hero (Joey passed away in 2001) nor a dirt-dishing tell-all screed. Instead it’s a dry-eyed yet sentimental look at Joey’s life from the point of view of someone who was there. To characterize the brothers’ relationship as difficult is to engage in vast understatement. Joey/Jeffery had some serious medical/psychological issues from which he suffered his entire life. Sad for him, of course, but those qualities informed his music to a significant degree, as the book illustrates.

Joey’s relationship with his parents is portrayed as equally dysfunctional. And some of the other characters in the story don’t come off looking too swell. Johnny, in particular, is painted as an especially unsavory character who’d as soon knife you as totally ignore you. It seems that for the most part, nobody in the Ramones much liked anybody else in the band. Tommy (Erdelyi) is pretty much the only character portrayed as having any sense of grounding, or (relative) normalcy.

Reading I Slept With Joey Ramone, I was struck by a few things. One, it’s amazing that the Ramones held together as long as they did. Two, since the book does fold in some music criticism, I was reminded that it’s worth pondering if they should have bothered much after 1985. But finally, I found myself grateful that someone took the time and effort to tell this story. Judging from the words of this 400-page book, loving the boy and then man who became Joey Ramone was often neither easy nor rewarding for Mickey Leigh. But love him he did.

Making the book even better than it would otherwise be, I Slept With Joey Ramone draws upon many interviews with relevant characters; the book’s acknowledgement lists them all, and their names fill a half page.

Occasionally veering close to too-much-information territory, I Slept With Joey Ramone manages to (just) avoid falling into that trap. The result is a must-read, not only for Ramones fans, but for anyone interested in a personal — rather than merely historical – look at the major characters of the 1970s Noo Yawk punk scene.