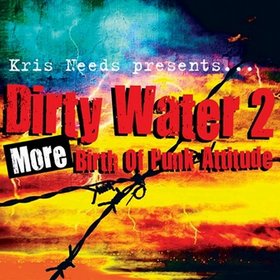 It wasn’t very long ago at all that Year Zero released the excellent compilation Dirty Water: The Birth of Punk Attitude. Curated by Kris Needs, the set took a quite liberal approach to defining punk, and made a case for its unique point of view through careful (though seemingly random) sequencing and informative liner notes.

So here we are with Dirty Water 2: More Birth of Punk Attitude. Once again Kris Needs goes to the well and comes back with an assortment (and I do mean assortment) of goodies. A few of the selections will seem ever-so-slightly redundant to collectors of other essential compilations, what with inclusion of such tracks as the early Captain Beefheart gem “Zig Zag Wanderer” and the Misunderstood’s “Children of the Sun,” both found on the Nuggets compilations.

But for every (relatively) well-known track there are some really left-field choices, some obscurities. The recently-unearthed Death makes a return appearance, but then so does Dizzy Gillespie. On paper, putting his “Bebop” on a punk collection seems incongruous; the lightning jazz guitar runs have little in common with what most listeners would consider punk. But Kris Needs’ concept of punk has less to do with how a song sounds and more with its outsider qualities. If it’s groundbreaking, if it defies the rules, then it’s a candidate for the punk label.

Some usual suspects are here: Suicide, Velvet Underground, Bowie, Mott the Hoople, MC5. But there are also true outsiders who enjoyed lower profiles. The United States of America’s “Hard Coming Love” is here in all its oscillating glory. Junior Murvin’s “Police and Thieves” influences many a punk band (not just the Clash) so its inclusion makes some sense. Woody Guthrie? The Silhouettes? Sure, if you accept Needs’ basic concept. Neither of those artists’ tracks on this set is musically outside the norm, but in these cases, it’s their lyrical content that merits their inclusion.

There’s some noise-rock here, some folk-punk, some proto-metal, some early powerpop (Big Star, Flamin Groovies). And there’s the Grand-Funk-meets-The Mothers of the Edgar Broughton Band’s “Out Demons Out.”  Taken as a whole this set isn’t quite the equal of the first volume – too many acts reappear, and do we really need Bowie’s “Suffragette City” on a compilation? – but it’s at once both a compelling and uncomfortable listen. And that’s precisely the point.