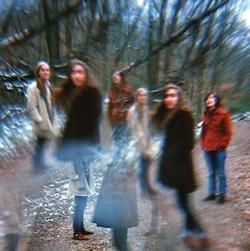 Lots of artists have jumped on the retro-psych bandwagon over the years. And as many have jumped back off again. Still, the list of groups who effectively conjured the vibe of the Byrds, Moby Grape and the Beatles does include some interesting names. In the 80s, Rain Parade did a fine job of updating the sound for that era. And the Brian Jones Massacre has (among other things) made a career out of deconstructing and reconstructing the lysergic spin of Satanic Majesties-era Stones.

The Paperhead are three teenagers from Nashville. That’s not the first place (or age) you’d look for the latest spin through fuzzy, backwards guitars and cymbal crashes, but it’s where you should look. The trio’s self-titled album kicks off with “Let Me Know,” which truly does sound like laid-back, droning-yet-melodic track from psych’s golden era.  “Except From Simon’s 1” sounds like a demo from the A Saucerful of Secrets sessions.

“Evergreen Tangerine” mixes in some folk to the jangle, hitting a sweet spot reminiscent of the criminally-ignored Clouded Staircase from like-minded act Starling Electric. That it goes nowhere musically makes it not the slightest bit less wonderful. The fuzzy throb of “Back to Those Days” reminds one of the Black Angels at their most tuneful.

“Can’t Keep My Eyes Open” could be slipped onto one of the collector-curated U-SPACES sets, and no one would be the wiser. Flittering ring oscillators and whatnot give just the right spacey feel, and a Monkees-ish guitar riff fits nicely alongside a shimmering combo organ wash. Are we sure these kids did this themselves, or is this the Electric Prunes masquerading as teens?

“Easy Living” is (perhaps thankfully) not a Uriah Heep cover. It’s a track where nearly everything except the vocal runs in reverse. Best experienced in a darkened room lit only by a lava lamp, it would seem all but impossible to pull off onstage. “Do You Ever Think of Me?” sounds — likely by design – uncannily like a Syd Barrett solo track.

The short track “Except From Simon’s 2” will make listeners – at least the ones who’ve made it this far and dig this style – want to hear the entire piece (assuming it exists). It’s a one-chord psych jam, yet it’s full of texture. “Getting Older” – a very brief cut — evokes Mass in F Minor-era faux-Electric Prunes.

On “Come Again” Paperhead conjures up bad-trip “We Love You” era Stones. Based mostly around acoustic guitar and tambourine, electric instruments wash in and out of the mix, creating a pleasantly disorienting effect. The buzzing crosstalk of “Wisdom” sounds like a link track from a film, something on the order of Quadrophenia or The Wall. Spooky and portentous of something…but what?

The Paperhead wrap up their debut with the folky, woozy campfire jangle of “He’s Mirrored.” The band sounds weary by this point, but it’s a pleasant weariness, one that leaves this listener looking forward to the follow-up.