Today Nicky Chinn turns 66. Songwriter, producer, svengali, Chinn is known for a lot of things, most notably being one of the prime movers behind The Sweet. Here’s a review of a Sweet comp from 2009. — bk 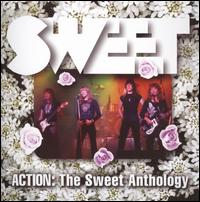 The 2009 2CD set on Shout!Factory is an exercise in revisionist history. But that isn’t necessarily an unreasonable endeavor. Action: The Sweet Anthology makes these forceful arguments concerning the British act (heyday 1971-78): (a) they were never given their critical/artistic due, and were unfairly categorized as lightweight; (b) they influenced other important and/or successful acts; (c) their music was due for a proper anthology.

As to the first argument, the music (or at least a good chunk of it) speaks for itself. Especially when (briefly) removed from their pop-culture context of glam and top 40 radio, songs like “Fox on the Run”, “Little Willy”, the immortal “Ballrom Blitz” and “Love is Like Oxygen” are all certifiably good songs. Even when viewed in the aforementioned contexts, they still hold up, and are more substantial and durable than the work of artists considered (at the time) as Sweet’s peers (Mud etc.) Yes, the early ChinniChapp-penned material chased its own tail (“Wow. That song was a hit. Let’s write it again and have another hit.”). But as the liner notes make the case, Sweet always wanted to get out from under the control of their “svengalis.” One listen to “You’re Not Wrong For Loving Me” (an early group-penned b-side) shows they had plenty of ideas of their own. When they got some control, they wisely meshed the best of their ideas with those of Nicky Chinn and Mike Chapman. The results gave them the blockbuster (sorry for the pun) release Desolation Angels.

Which leads to the second argument. Tough as leather, yet foot-stompingly catchy tunes gave the group hits. Their helium vocals and simple yet intelligent synthesizer use arguably influenced Queen and Electric Light Orchestra. Their visual style certainly influenced “hair bands” such as Mötley Crüe, though whether they should be lauded or pilloried for that is up to you, dear reader.

Point three is beyond question. This two-disc set spans the group’s career for 32 tracks, charting Sweet’s development from bubblegum to glam to hard/arena rock (sort of proto-glampunk in its approach) to the more ambitious (and largely successful, though overlooked) work of the Level Headed era, on to some scattered gems among their later wasteland period.

At its worst, the Sweet oeuvre is a collection of guilty pleasures. At its best (the hit singes, the epic album version of “Love is Like Oxygen”, the Bowie-esque anthem “The Six Teens”) it ranks among the best radio-oriented rock of the 1970s. And the group’s sheer chutzpah as they rip off other bands on some of their lesser-known tracks remains nothing short of clever. “Rebel Rouser” (not, ha, the Duane Eddy hit) is in fact a blatant, shamless theft of Eddie Cochran‘s 1959 hit “Somethin’ Else.” “Stairway to the Stars” rips off too many bands to name, but it’s still fun. “California Nights” must have piqued the attention of Peter Grant on behalf of his clients Led Zeppelin. “Cover Girl” would sound at home on a Queen LP. And to be sure, there are missteps. “Funk it Up (David’s Song)” is a derivative nod in disco’s direction, though even it attempts to adapt Sweet’s style to the format. Yet they remained ahead of their time, if only by minutes: There is clear foreshadowing of the yet-to-debut Cheap Trick‘s style in 1975’s “No You Don’t.”

The later songs “Call Me” “Big Apple Waltz” are still good, but by that point, Sweet’s commercial star had faded. Lead vocalist Brian Connolly was busy drinking himself to death (an underground collector’s video compilation includes an unedited interview with a reformed Sweet circa 1990; the wrecked, hollow-cheeked, jittery and shaking Connolly makes Keith Richards look like a picture of health), and his incapacity kept proper reunions from getting off the ground. So Sweet, like so many other groups before them, watched while other groups took their approach and ran with it to great success.

Sweet has been unjustly overlooked. Is their stuff great art? Probably not. Is it great rock and roll? A good portion of it is, yes. And Action: the Sweet Anthology remedies the lack of proper career-spanning Sweet compilations. For an introduction to the band, this is one to buy. For most, it will suffice. The rest should pick up Desolation Boulevard and Level Headed and continue in any direction from there. If you can listen to this music without smiling, then you don’t like rock music.