Ivan Julian muses, “When a lot of guitarists from bands finally make their solo album, there’s not a lot of guitar on the record! They’re trying to do this radio thing, and all of a sudden, they don’t play.” His approach on The Naked Flame was different: “I said, ‘I’m not going to make that mistake; I’m going down to the studio and bash it out.’” 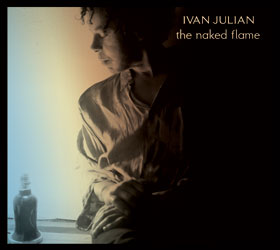 Most of the songs on the album are written solely or in part by Julian. But he includes two covers: Lucinda Williams‘ “Broken Butterflies”  and Alejandro Escovedo‘s “The Beat.” Julian says that the original of Escovedo’s song is “a seven-inch I’ve had for years. And I’ve said to myself for years, ‘One of these days I’m going to re-record it. Because the world needs to hear it.’ Well,” he chuckles, “not that lots more people will hear it, but more people will hear it than the first time. Because there were only maybe five hundred of those things pressed.”

“As far as the Lucinda Williams song,” Julian says, “that album Essence is one of the best albums ever. And I thought I could get away with it, to be honest,” he laughs heartily. “Of all the songs on there, it’s the least like her doing it that I can possibly imagine.

The track “The Funky Beat in Siamese” has a deeply confusing beat. “Sometimes it starts with a lyric,” Julian explains. “And then I have to find a backdrop to make that lyric fit. That song is a summertime song, and so I wanted a groove for it. I’m very groove-oriented. I was listening to a lot of James Brown when I wrote that.” Julian raves about Brown’s brand of genius, noting that he “created his own genre. It was James Brown music, and it became funk. He took no prisoners; I wanted to write songs like that.” The song’s title might need some explaining, and Julian obliges. “The fire department hookups on New York City streets are called Siamese sprinklers. The song was inspired by seeing one of those turned on during a hot summer day. In New York, when it’s hot, everybody’s sweaty and has this rat-in-a-cage look to them.” 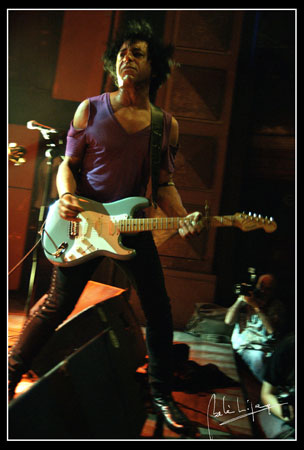 In the studio, Julian approaches his own recordings the same way he does with other clients (Candy Golde, The Fleshtones). “I consider myself an editor,” he explains. “So I try to edit myself. But I will admit that I allow myself to do some things I’d never do with other projects. Like,” he laughs guiltily, “preparing eighteen mixes of ‘A Young Man’s Money.’”

One of the more remarkable tracks on The Naked Flame is “You is Dead.” The cut has a country blues / work song vibe, and it sounds like something of which Alan Lomax might have made a field recording. “That was the idea,” Julian admits. “I was sitting in my living room with my Epiphone Bluesmaster; it’s a kind of Robert Johnson-looking acoustic guitar, and it sounds like a cardboard box. And I had a tube mic that’s kind of scratchy as well. And I just decided to record it there; it’s the one song on the record that wasn’t recorded in a studio at all.”

“I was listening to a lot of Howlin’ Wolf around the time I wrote the song,” Julian admits. “I wanted the courage to write something like that, to have the complete bravery to say something like Howlin’ Wolf would’ve said it.” Julian succeeds in this song, a clear message to his late friend and collaborator, guitarist Bob Quine. Julian sums up the song’s theme: “You is dead, fuckin’ asshole. Why’d you do this?”

Even though it’s certainly not retro, Julian’s track “Sticky” is full of subtle nods to the sixties: the Mamas & the Papas, the Kinks, and Dylan by way of Hendrix. Julian says that the sixties feel was “not really what I was going for, but that’s how it happened. I love those groups, and The Turtles. But those West coast bands,” he marvels, “you can’t live on the East coast and write music like that.” Julian chuckles that his goal here was to write a “socio-political quasi-ballad.”

There’s a jagged, buzzing, live in the studio feel to all of these tracks, especially “Constricted.” Surprisingly, the record wasn’t recorded that way at all; the tracks were pieced together. Spain-based band Capsula recorded the basic tracks on tape at their own studio, then converted the music to digital files to send across the Atlantic to Julian in New York City. “Then I put it back to tape,” Julian explains, “and added everything else myself. Part of the live sound comes from the fact that I try to use tape whenever I can.” The Naked Flame is pleasingly as far as possible from a sterile studio concoction. “One thing I can do,” Julian laughs, “is make noise.”