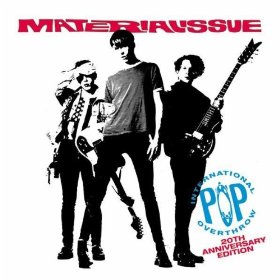 What do Valerie, Diane, Renee and Christine have in common? They’ve each got a song written about ‘em on Material Issue’s 1991 International Pop Overthrow. And those songs have something else in common: each is a near-perfect slice of that particular brand of Midwestern powerpop.

The Chicago trio released several records, but this one is their best. While the band would come to a tragic end – leader Jim Ellison would take his own life in 1996 – they left behind some exuberant music. And the title of this album was recycled and used for a most apropos purpose: an annual music festival.

International Pop Overthrow has gotten the 20th anniversary reissue treatment from UMe. The expanded reissue adds a handful of related (and worthwhile) tracks, but the original album itself contains enough pleasures all on its own. Songs like the opening number “Valerie Loves Me” display a deft balance of crunch, bounce and melody. Ted Ansani’s thick, assured bass lines and Mike Zelenko’s powerful, precise drumming provide the thundering backbeat on songs like “Chance of a Lifetime.”  And while Material Issue’s sonic delivery bears some similarities to fellow Midwesterners Cheap Trick (Ansani’s even pictured on the album cover sporting an eight-string bass), Ellison’s playfully affected faux-British vocalizing gives the trio a distinctive sound all its own.

It’s not all punch and drive on IPO; the lyrics and arrangement on “A Very Good Idea” and “This Letter” show a sensitive, heartbreaking side to Ellison’s songwriting. (The latter sounds a lot like Cheap Trick’s “Voices,” by the way.) A lyrical turn like his achingly-delivered “Oh yes it’s me / I’m drivin’ past your house again” will likely strike a lump-in-the-throat chord with anyone who’s ever been a typical teenage male.

But the band balances the pathos of teenage heartbreak with arena-sized anthemic rockers like “Crazy” and “This Far Before.” Storytelling that aims for a Dylan/Springsteen style is on the menu in “Trouble,” and a jangling, countryish vibe is served up on “Very First Lie.”  The quality never flags on International Pop Overthrow, and the original album remains an essential part of any powerpop collection. They’d continue their girl-centric lyrical approach with “The Problem With Jill” (on the compilation Yellow Pills #3) and a cover of The Green Pajamas’ “Kim the Waitress,” but International Pop Overthrow is Material Issue at their apex.

The 20th anniversary reissue brings together some interesting bonus tracks. Among these is a note-for-note recreation of Thin Lizzy’s epic “Cowboy Song” (from the rare promo-only Eleven Supersonic Hit Explosions). At first bluish that might seem a stylistic left-turn, but Ellison’s occasional ambitious lyrical concerns mean that it’s actually a fitting choice. The band is firing on all cylinders, capturing all the power and nuance of the original, right down to the (overdubbed) guitar duel.

A cover of The Sweet’s “Blockbuster” suggests – in case you somehow missed it — that the early 70s were an influential musical period for the guys in Material Issue. They absolutely nail the over-the-top vocals on this one. “Echo Beach” (an original, not a cover of the Martha and the Muffins song) has a propulsive, jangling arrangement that feels like Katrina and the Waves wearing Shoes. If that sounds like bliss to you, well, you need this.)

What sounds initially like a live version of “Very First Lie” quickly turns into a cover of Simon and Garfunkel’s “The Boxer,” given a decidedly Material Issue-styled reinvention. Material Issue’s “Sixteen Tambourines” (from a 1988 CMJ Sampler) shows that the band had fairly well nailed their sound years before the International Pop Overthrow album. Though the other bonus tracks are good, they sound like almost-worthy tracks recorded for — and ultimately pruned from — IPO.