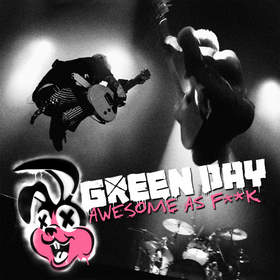 I am not a film critic. That simple fact is one of two reasons I will not be reviewing Anywhere, U.S.A. a movie now out on DVD. (The other reason is that, having viewed this locally-produced film featuring local talent, I can’t come up with a single positive thing to say about it. And I have to live in this town.)

Anyway, I’m not a film critic. But I know enough about how the industry works to understand that when I learn that a new film has not been made available to critics for pre-screening, there’s often a simple reason: it sucks. That’s just how things work.

Now, on a wholly different subject (wink, wink), Green Day has a new album. Brattily titled Awesome as F**k, this live album is to be issued in multiple formats, including vinyl. Cool, right? Yeah, I thought so too. So, when I got a press release trumpeting this upcoming album, I asked to be added to the list for promo copies.

Eventually I heard back that physical copies wouldn’t be available to reviewers. While disappointing, that’s an increasingly-common fact of life in 2011. So, would a download be available to critics? Nope, I was told. Only a stream. So I could log into a private page and listen to the whole album in lo-fi. Right?

Wrong again. In their infinite wisdom, Green Day has deigned to make but five of the album’s seventeen tracks available for review. “But I hope you can still review it,” the publicist told me. (It’s important to point out that said publicist had to work with what he was given; it certainly wasn’t his idea to provide a mere glimpse of this album he’s trying to promote.)

Well, I won’t be reviewing Awesome as F**k here. Expecting a review based on hearing less than one-third of the album is unreasonable. It’s akin to asking an art critic for her thoughts on a painting, but only letting her see the bottom half of the artwork. Or asking a film critic to weigh in on a film’s merits after viewing only the second reel.

When a new film is not made available to critics ahead of its release, quite often it’s because the studio knows it’ll get savaged; they hope that the advertising campaign will get enough asses in seats on opening night to recoup their investment. That way they can cash in before word-of-mouth gets around that, well, this movie ain’t too good. Just sayin’.