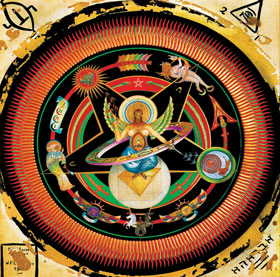 The a-side of White Orange’s single “…And This is Why I Speak to You in Parables” unfolds with insistent sheets of gauzy, hazy, druggy guitar figures. A sludgy Sabbathy rhythm section joins in the fun after awhile, giving the track a doom/stoner vibe. Just when the listener has tuned in and turned on to a head-nodding groove, the whole thing drops out. When the instrumentation kicks back in, the vocals start. Musically, not a lot of ground is covered in the track’s thirteen minutes, but then adventurousness isn’t White Orange’s goal here. They establish their vibe and effectively stick to it.

There’s nothing particularly retro about White Orange’s approach; their sound is, in the end, closer to a slowed-down Nebula or The Sword, though whatever (admittedly minimal) arena-rock tendencies those artists might possess is absent in the more direct approach of White Orange. Ultimately, thirteen minutes of “Parables” is a bit much, at least without the accompaniment of pharmaceuticals.

The disc’s flip-side “Middle of the Riddle” stakes out a slightly heavier (and marginally quicker-paced) feel. It also features some more interesting guitar work beyond the foundational riffage. What’s more, it clocks in at a relatively restrained five minutes. While it does trade in some of the same arrangement gimmicks, it’s not “…Parables (Slight Return).”

The 12” vinyl disc is lavishly decorated; the vinyl itself features splashy, eye-popping full color graphics on both sides, and the disc itself is a thick slab that might call to mind 78rpm discs of old (ask your grandparents). The sleeve art is similarly striking.

If these two tracks are a representative sample of what we might expect from White Orange’s imminent long player, then further investigation is warranted for fans of the genre.