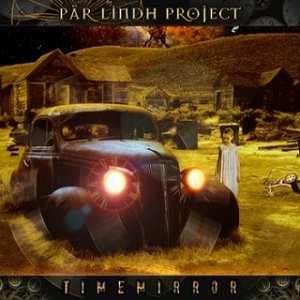 If someone told you they wanted you to hear a progressive rock album that centered on keyboards, you might – assuming you didn’t run for the nearest exit – expect a pretentious, ponderous collection of songs. Pär Lindh Project’s Time Mirror is not that sort of creature at all. Largely – but not exclusively – instrumental, this four-song album does trade in progressive styles, but the hook and melody quotients are high.

Lindh employs a staggering number of keyboard textures, but they’re never quite over-the-top. Whether it’s Herbie Hancock-style funky synth lines (as heard in the first few minutes of the title track) or cathedral organ chording and scale runs (as found later on the same track), Lindh delivers the goods with style. While there are but four tracks on Time Mirror, each number veers through a number of sections – hell, let’s call ‘em what they are: movements – over its runtime. After a vocal section featuring Alan Lewis (Starcastle) “Time Mirror” finds Lindh playing wild west-style tack piano with what sounds like a tap dancer joining in the fun. If the listener’s head isn’t spinning by this point, s/he’s not paying attention.

And that scenario’s not likely. Time Mirror is not the sort of album that one can ignore. Love it or hate it, the record demands attention. There’s not a note of guitar on Time Mirror, but unless you’re a guitar fiend, you won’t miss it. If, on the other hand, you’re a keyboard fanatic, you’ll find a lot to like. If the melodies and arrangements weren’t so strong, Time Mirror might come off as some sort of demonstration disc. The liner notes list the arsenal of keyboard instruments at Lindh’s disposal, and the list is quite lengthy. Lindh is pictured (in the album’s digipak) wearing a cape, which is the spot-on sartorial choice for a keyboard player of his stripe.

Lewis’ vocal style is very similar to Jon Anderson, with a slight rasp that gives it some additional texture and character of its own. The title track’s Lindh-penned lyrics deal with the wings of time and so forth, but then you figured as much, didn’t you? But just wait; there’s some unexpected variety in store.

On the relatively brief “Waltz Steet,” Lindh plays a manic piano figure while Lewis sings his own lyrics about the recent U.S. financial meltdown. With its references to Fannie Mae and Freddie Mac, the song threatens to be forever fixed in time as an artifact of its era, but the bluesy (by way of Keith Emerson) organ solo is the song’s true highlight. And there’s a further Emerson connection: when the Nice re-formed, Lindh took Emerson’s keyboard role in that group.

There’s a modern dance feel to the tracks on Time Mirror; it takes little effort to conjure a mental picture of dancers providing visual interpretations of PLP’s songs. “With Death Unreconciled” is dedicated to the group’s previous vocalist Magdalena Berg, who passed away in 2007. Lewis sings Lindh’s heartfelt lyrics in tribute to Berg, and while the subject as a whole is sad, it’s a welcome and refreshing departure from prog’s unfortunate tendency toward Dungeons and Dragons-oriented lyrical subject matter. And when Lindh takes his solos – and he takes them in spades, mind you – the emphasis is equally placed on melody, hooks and technical brilliance; it’s a sure-footed balance.

The album’s final track, “Sky Door” is completely instrumental. With hard-charging attack, it’s similar to what one might get combining Spock’s Beard with Tales of Topographic Oceans-era Yes. Lewis’ drum work and William Kopecky’s bass provide propulsive, sympathetic backing for Lindh’s stratospheric keyboard excursions, and the track gives them a chance to show off their skills (yes, Derek Smalls fans, there’s a bass solo) without getting overly indulgent.

Time Mirror blazes by, leaving the listener simultaneously exhausted and yet wanting more. For fans of symphonic prog with heavy emphasis on keyboard, it’s an exemplar of the best the genre has to offer.