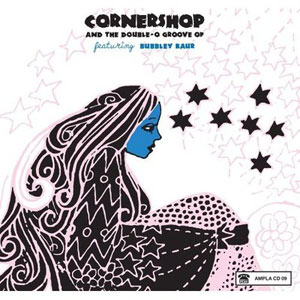 To the listener uninitiated and unfamiliar with Cornershop’s approach, the group’s melding of traditional Punjabi folk and modern breakbeats, baroque pop and plain old pop might seem a bizarre hybrid. The truth is, more often than not the combinations work. The unresolved-preposition-titled 2011 album Cornershop and the Double-O Groove Of features the female vocals of Bubbley Kaur. She sings strictly in a Punjabi dialect while Tjinder Singh and Benedict Ayres craft a kinetic and sympathetic groove undercurrent.

Bubbley’s phrasing is rooted in her native language, yet it fits well into the western pop concoctions that, er, bubble under her. At times – for example, on the 2004 single “Topknot,” collected on this album of mostly new material — the vocal-and-pop combo resembles something one might hear toward the end of a Bollywood film. Even then, there’s a modern vibe that offers a pleasing intertwining of traditional Indian instrumentation (or, more likely, samples thereof) with modern pop instrumentation and a decidedly dance-oriented beat.

Other times — such as on “The Biro Pen,” the Cornershop groove is closer to the sort of thing one might find on a Pizzicato Five album, with its jazzy, almost Steely Dan-like piano chording. The clanging percussion and rubbery bass groove of “Supercomputed” has a dancefloor vibe, but then so do all ten tracks on the disc. The brass of “Once There Was a Wintertime” calls to mind that particularly twee sort of late 60s British lite-psych, but weds it to a stuttering, modern drum pattern.

A one-note sitar lick is the basis of “Double Digit,” but the stop-start percussion and a catchy bass riff hold it together and move it forward. The album is a departure from earlier Cornershop material in that Singh doesn’t take any of the vocals, and there’s nary a word of English to be found in the lyrics. And the Indian influence is central to the songs in a way merely hinted at on earlier releases. Yet there’s enough of a western feel to the arrangements to provide a touchstone for – to mix metaphors – open-minded American ears. The acoustic guitar work on “Don’t Shake It” answers the question “What would it sound like if James Taylor hooked up with a dance band?”

If you’re up for something a bit different, a combination of the familiar and exotic all delivered with fun and style, then Cornershop and the Double-O Groove Of may be just the ticket.