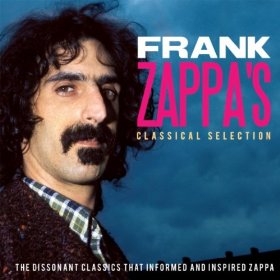 Frank Zappa was never shy about admitting his musical influences. On the contrary: he enthusiastically pointed them out, in hopes that people who appreciated what his music was about would explore further. As early as the first Mothers LP (1966’s Freak Out!) Zappa went to the effort of name-checking a bunch of those artists. That so-called Freak Out List would serve as a roadmap for adventurous listeners who wanted their music to be of the challenging variety.

In 2008 the folks at Chrome Dreams released Frank Zappa’s Jukebox: The Songs That Inspired the Man. That single-disc set explored the (relative) pop side of Zappa’s influences, from doo-wop to blues. A decidedly more ambitious and challenging set is the 2011 double CD set Frank Zappa’s Classical Selection: The Dissonant Classics That Informed and Inspired Zappa.

The title says it all. Well, not quite all: Derek Barker’s sixteen-page liner notes are an essential component of the package, especially in light of the set’s goal: introducing these work to relative newbies. The first disc is (again I’ll use the term relatively) the accessible one. Well-known works including Wagner’s “The Ride of the Valkyries” and Gustav Holst’s “Jupiter” from The Planets are here, and in thrilling versions: that’s Holst himself conducting the London Symphony Orchestra.

Anyone with more than a passing knowledge of Zappa’s work will expect a track from Edgard Varèse, and in this case it’s “Hyperprism.” Other composers included on the jam-packed first disc include Ravel (conducting his “Bolero”), Stravinsky (the only composer to merit two cuts on the disc) and Anton Webern. Things take a decidedly avant garde turn in the disc’s more-or-less chronological sequencing; Arnold Schoenberg and Silvestre Revueltas may be lesser-known composers than Wagner and his pals, but their influence on Zappa is unmistakable. George Antheil’s “Ballet Mecanique” is a terrifying piece of music that must have seemed quite ahead of its time in 1924. For what it’s worth, John Cage’s “4.33” is included, though it’s hard to take that one seriously. Another Cage composition might have been more instructive.

Things get seriously weird with Conlon Nancarrow’s player-piano-in-outer-space excursion “Study No. 11,” and it’s around this point in the disc that less adventurous listeners might get off the train. But if one is curious about Zappa’s roots, holding on for the bumpy ride is the only choice. The disc wraps up with the performance that will sound the most Zappa-like to most listeners: Pierre Boulez’s “First Movement of Le Marteau Sans Maitre.” With its tuned percussion and multiple overlapping melodic lines, it’s a clear influence on Zappa’s style, especially on mid-70s albums including Orchestral Favorites and Studio Tan (later collected as Läther).

The second disc consists of material from the latter half of the 20th century; most of these are lengthier pieces that help the set’s title earn its use of the word dissonant. Harry Partch’s depression-era hobo saga “”U.S. Highball” is a deeply odd yet moving work; it’s avant garde almost beyond description, consisting of spoken dialogue, bits of stagey singing, tuned percussion and sound effects. The piece likely exerted influence on Zappa’s Lumpy Gravy. The doomy operatic work “Il Canto Sospeso” from Venetian composer Luigi Nono uses a choral approach not dissimilar to the sort of style Zappa would employ on 200 Motels.

Karlheinz Stockhausen’s 1958 work “Kontakte” is the longest work on the set. It’s also the work that feels the most Zappa-like, with its strange “snorking” sounds and use of electronic textures. Sections of silence and near-silence are used to great and contrast-enhancing effect. Olivier Messiaen’s orchestral work “Chronochromie” seems somehow less adventurous coming as it does after Stockhausen, but it’s quite evocative at creating a compelling sense of unease. At times the piece’s ambience suggests cartoon music, but then it quickly takes a left-turn into weirder, more dissonant textures. The second of its two parts has more in common with the music of Frank Zappa.

Krzysztof Penderecke’s terrifying 1960 orchestral piece “Threnody to the Victims of Hiroshima” manages to aurally suggest violence, chaos and destruction more effectively than any other instrumental work this reviewer has ever heard. The composer conducts the Polish Radio National Symphony Orchestra in this work full of contrasting volumes.

Frank Zappa’s Classical Selection closes with a purely electronic work by a composer who assisted Varèse in his efforts. Turkish composer Bülent Arel’s “Electronic Music No. 1” clearly exerted influence on the avant garde end of the 1960s rock world; his work here sounds not wholly unlike sonic experiments by Joe Byrd’s group The United States of America.

Thanks to its careful and thoughtful selection of performances, excellent sound and informative liner notes, Frank Zappa’s Classical Selection can serve as a useful gateway into the sonic influences that helped give the world Frank Zappa.