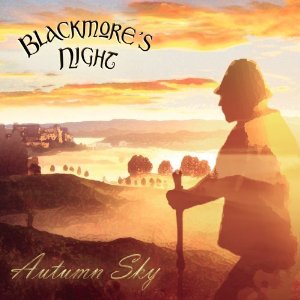 It may come as a great shock to discover that Ritchie Blackmore — the man responsible for one of rock’s most immortal and primordial riffs (the centerpiece of Deep Purple’s “Smoke on the Water,” but then you knew that) turned away from that style rock more than a decade ago. Blackmore’s current focus is on an act he cleverly calls Blackmore’s Night. The project features the axeman on (mostly acoustic) guitar, mandolins and all manner of Renaissance-period instruments. And his lady, vocalist Candice Night (get it now?) handles the vocals and a wide array of medieval breath instruments (pennywhistle, rauschpfeife, etc.).

With a sound and image that falls into the center part of a Venn diagram of Stevie Nicks, Renaissance festival music and, well, Deep Purple’s poppier moments, Autumn Sky (the act’s eighth studio release) is remarkably effective at what it sets out to do. Night’s voice is clear and reasonably strong (though she’s no Annie Haslam), and Blackmore does slip the odd electric guitar lead into the songs. But there’s a mannered, regal approach to the arrangements: Blackmore’s Night takes what are essentially straightforward pop tunes and imbues them with a ren-fest vibe. More often than not, it works.

This isn’t prog rock; not by a long shot. Not one of Autumn Sky’s fifteen tracks breaks the six-minute mark. The arrangements are clear, not fussy, and Night’s vocals are always front and center. At times the music approaches new-age, but Blackmore’s guitar picking (he’s a surprisingly effective acoustic player) keeps the proceedings firmly rooted in more popular styles.

The liner notes list personnel this way: “Touring band consists of…” That suggests that the Autumn Sky lineup is in fact simply Mr. and Mrs. Blackmore (they wed in 2008 after nineteen years together). Blackmore is proficient on plenty of instruments, though some of the percussion sounds canned and mechanical. At its worst, Autumn Sky suggests Stevie Nicks backed by Mannheim Steamroller(!) but at its best – which is, thankfully, much more often – the album is a pleasing excursion in a relatively unique and singular musical direction.